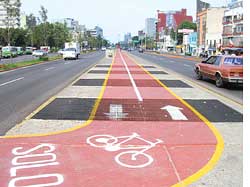 The Pan-American Health Organization (paho) has recognized the Mexican capital's municipal government for its promotion of bicycle use, but cyclists and activists argue that it is not deserved. "They awarded the wrong city. Here, riding a bicycle continues to be risky," Leonardo Torres, a participant in the campaigns and tours of the non-governmental group Bicitekas, told the Latin American website Tierramrica.

paho awarded Mexico City the 2008 International Active Cities-Healthy Cities award in the physical activity and recreation category, because of its "Muvete en bici" (move yourself on bike) programme. But less than one per cent of the trips inside the city are made on bicycle.