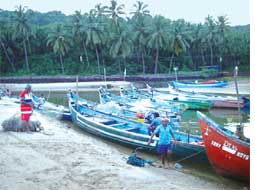 GOA's fisheries minister Joaquim Alemao wants to advance the monsoon ban on fishing by 15 days, from the June 16-July 31 period to June 1-July 15. He said the second half of July, when the ban is relaxed for small-scale fishers, yielded a good catch and after August 1 there was not much yield.

The state government will approach the Supreme Court for the shift in ban. Fishing is not allowed between June 16 and July 31 because it is the breeding season for fish.

Alemao claimed traditional fishers catch huge quantities of solar prawns before the fishing season begins for mechanised boats on August 1, leading to a decline in the total yield. Last year the fish yield in Goa dropped by 5 per cent, he said.

Fisheries experts agree that there has been a decline in the fish catch but blame it on overexploitation of fish. "As per the un policy of exploitation of fish, for every 10 km coastline there should not be more than 30 trawlers," said Z A Ansari, senior scientist at the National Institute of Oceanography, Goa. "The coastline of Goa is about 104 km, which means there should not be more than 315 trawlers. But the state has over 1,200 trawlers, four times the permissible limit," he said.

Some fishers allege say the proposal is politically motivated. "The proposal to shift the ban period is made by trawler owners. The minister himself owns many trawlers," said a fisherman at Baga beach in North Goa on condition of anonymity.

"During the entire ban period, local fishers have no earning. Though we are entitled to monetary relief during the period, we don't receive any," said a fisherman from village Betim in North Goa. According to Ansari, the crucial aspect to small-scale fishers is the financial support during the ban period, so that they don't venture into fishing during the ban.