They want to attend a school 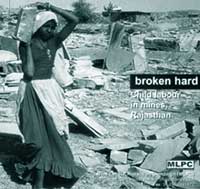 Stooped over heaps of sandstone, bare and broken hands holding a rough iron chisel and a mallet, Veerachami makes cobbles under the burning sun for Rs 20 a day. He is lucky: he is one of the few children in the mine that goes to school. For the majority of the child labourers in the Rajasthan stone mines, the quarry is their life.

These children are protagonists of the documentary under review. Produced by the Jodhpur, Rajasthan-based Mine Labour Protection Campaign (mlpc), Broken hard, child labour in mines of Rajasthan puts the plight of numerous child labourers in sharp relief. With the minimum of dialogue, we see the extent of these children's world. Babies sit amongst razor-sharp shards of rock, drugged on opium to keep them quiet, while their mothers, sisters and brothers clear rubble and chip away at cobbles and slates. Girls are kept at home to take over domestic chores and look after their younger siblings until they too reach mining age.

According to the mlpc fact sheet accompanying the video, child labour in Rajasthan has more than tripled since 1981. Most work in hazardous and extreme conditions for long hours and little to no pay, and are at risk of death, disablement or long-term illness. The low wages of parents and their alcoholism push children into supplementing the family income, especially in large families. Bonded child labour also remains rife in Rajasthan. Seventy per cent of these children have never gone to school.

Cheap and socially relevant schooling is a must for these children: mlpc hopes to raise this awareness through this cd.