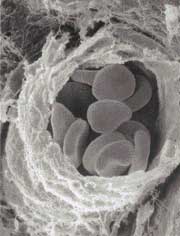 the possibility of developing a universally acceptable blood type has risen following the coating of red blood cells with a polymer. Researchers from the Baylor College of Medicine, Houston, and the Albany Medical College, New York, achieved this by disguising the red blood cell surface with polymer coatings. Such a blood cell would help make a blood sample suitable to all patients irrespective of their blood group. Moreover, checking of blood group before administering it would be avoided if polymer-coated cells can be developed to achieve a universal blood type ( New Scientist , Vol 154, No 2082).

Blood transfusions are essential to save lives and organising donors is a difficult task. Moreover, about 50 per cent of blood received from voluntary donors in India is unsafe, according to a study by Blood Bank Society. In addition, such blood is often expensive, unreliable and may even carry viruses such as hepatitis b or the hiv . In India, the requirement of blood stands at over 40 lakh units every year. Blood banks can supply only 19 lakh units. The universal blood group will reduce the immense pressure on blood banks.

There are over 400 blood groups and it is important for the doctors to know which blood group suits the patients before a transfusion is given. Nearly 45 per cent people belong to the o or a blood groups. Only 8 per cent belong to the b category, and still fewer -- about 3 per cent -- have the ab group.

The presence or absence of certain antigens on the surface of the red blood cells determines which group a person belongs to. These antigens can trigger powerful and destructive reactions in patients given the wrong blood type. People with type a blood must be given blood of type a or type o , the universal donor. Only people with ab type are universal recipients; able to receive any type of blood. Only o group blood cells lack type a and type b surface antigens. In an emergency, group o blood can be given to any patient because it provokes no reaction from the immune system. This is why o group blood is always in short supply.

A universal blood type will help avoid adverse reactions of infusion of a wrong blood group and reduce the process of testing and labelling before it is stored. An estimated 75 per cent of transfusion accidents in India are caused by wrong entries in registers and wrong labelling.

Mark Scott and his team of researchers at the Baylor College disguised the transfused blood using a polyethylene glycol ( peg ) coating. They separated erythrocytes (red blood cells) from other blood constituents such as plasma and platelets. The coat was applied by mixing the cells with peg . The polymer coating does not interfere with the primary functions of the blood cell, such as carrying oxygen to various parts of the body. Coated cells live as long the normal cells and stop antibodies from recognising and rejecting them.

Scientists have been successful in testing this experimental blood type in animals, and with human cells in test tubes. Coated sheep and rat blood cells injected into mice lasted 360 times longer than untreated cells. Human cells have functioned well and lived up to 50 days -- the normal life span of a red blood cell in our bodies.

Applications of peg -coated blood cells would include dealing with diseases like sickle-cell anaemia and haemophilia, where people require regular blood transfusions. Because these patients have transfusions so frequently, they tend to develop reactions to blood of their own group. The researchers hope to block all harmful reactions with minor cell surface proteins by administering red blood cells coated with peg .