Thirsty? Try a glass of skywater

Water can be made from air, but it has its cost

Some weeks ago when Amit Biswas was handed a cup of water for the customary rinse-and-spit after a dental procedure he already knew the water’s source.

Although his gums were hurting from the extraction of the wisdom molar he remembered what Pritpal Singh, dental surgeon and proprietor of Aradhana Clinic, told him a year ago: “This water has been generated out of thin air.”

Two years earlier, Singh renovated his clinic in Dehradun and invited family and friends to the opening ceremony. Among the invitees was his flatmate from a dental college who gifted him an atmospheric water generator. The machine produces 15 litres of water each day and meets the clinic’s water needs (see: The air sucker).


Sometime in mid-2009, Singh came across an Internet link to a video which showcased an awg (atmospheric water generator) in India. The machine, capable of producing 1,000 litres of water each day, was installed by WaterMaker India, an exclusive licensee of Air Water International in the US, at Jalimudi village in Andhra Pradesh.

A village of 600 inhabitants, Jalimudi had a contaminated well and the only alternative was the Godavari river, at a distance of two km, said Meher Bhandara, director of WaterMaker India. “It was an ideal location to showcase our air-to-water station,” she added. In February 2010, Jalimudi celebrated the first anniversary of the awg. Each family can now access the station and bring back vessels filled with water. The news had spread, said Bhandara, that Jalimudi has a safe source of drinking water. “I am told as a result of this, marriage offers have been pouring in from neighbouring villages.” 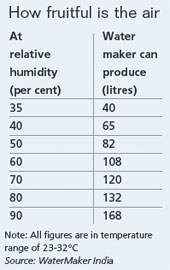 On seeing the success of the water generator installed at Jalimudi, Singh wanted to buy it immediately. “This would ensure being completely off the grid when it comes to water,” he said. That would mean not being dependent on the water utility in Dehradun, which according to Singh supplies at best a trickle for one hour each day. Unfortunately for Singh this could not be realized; the machine cost Rs 12,90,000. He could afford the 25-litre Magic Mini, though, at a cost of Rs 45,000 to supplement water use in the clinic and drinking water requirement at home.

For a dental surgeon quality of water is of utmost importance. Bad water puts at risk his patients as well as the equipment, said Singh. For instance, the drilling devices, each costing Rs 8,000, get clogged and require replacement twice a year. Water is used to cool them as they heat up with use. Singh said the one in use has been in operation for more than a year and is testament to the quality of awg’s water.


The government of Uttarakhand has taken an interest in supplying water using awgs to some of the villages located in difficult terrain. In December 2009 a meeting was convened in Dehradun by the Uttarakhand Jal Sansthan (ujs) inviting manufacturers to present their technology. The local meteorological office was requested to provide data for three stations to be located nearby. To function optimally awgs need 70 per cent humidity with temperatures between 25°C and 32°C. It will trip if relative humidity falls below 35 per cent (see table). Last year the average relative humidity in Dehradun was 64 per cent.

Last month the ujs submitted a proposal to the state drinking water department to install eight experimental units with a production capacity of 1,000 litres each. It has proposed to set up one of the units at Kalsi village, 35 km from Dehradun. P C Kimoti, superintending engineer at ujs, said such systems can provide three litres of safe drinking water to each person.


The water meets the Bureau of Indian Standards for all quality parameters and trace elements. The question is whether it is too pure. The maximum standard for total dissolved solids (tds) is 500mg/l. All samples as listed on their website had total dissolved solids of less than 50mg/l. “International packaged waters such as Kinley and Aquafina have a tds count of less than 20mg/l,” said Tushar Trivedi, founder of www.bottledwaterindia.org, a one-stop website for the industry in India. who, in this case, is uncertain as there is no conclusive evidence on whether low tds in treated drinking water has adverse effects on health. A detailed country-specific study is needed to assess it, said Pawan Labhasetwar, scientist at the National Environment Engineering Research Institute in Nagpur. 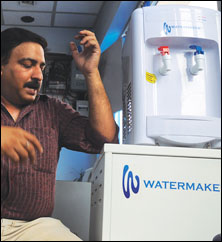 Proponents say awg is a boon for areas where ground or surface water is contaminated with seawater intrusion or chemicals like fluorides. “The concept is fascinating, but the operating costs are prohibitive,” said Manu Kocchar, owner of Madhuban hotel in Dehradun and runs two more hotels in a hill station 29 km to the north; has not ruled out use at a later stage. “If operating costs reduce, I would reconsider,” he said. Bhandara adds that “electrical cost is a concern in areas where power costs are high.” This is precisely why Singh has installed his awg in his house next to the clinic, slashing operation cost by half. “Since the new electricity tariff in Uttarakhand came into effect on April 1, domestic rates are Rs 2.20 per kW/h versus Rs 4 for commercial connections,” said Singh.

WaterMaker India said the production cost is between 80 and 140 paise per litre. “We have just begun introducing the small units of 25-120 litres which are purchased for homes, small offices,” said Bhandara. The larger units of 250 litres or more, she said, are for bigger offices and construction sites. Sales, in areas with high humidity are picking up but “this is a new concept and will need time to fructify,” she said.


An awg captures water vapour before it touches the earth and operates like a dehumidifier. Could it then have the same dry effect on the micro-climate as a dehumidifier would in a room?

When asked, Krishna Achuta Rao, associate professor at the centre for atmospheric sciences at iit in Delhi, pulled out a book titled The Physics of Climate. One of the pages had a figure on the Clausius-Clapeyron relation that shows temperature v saturation-specific humidity to calculate how much water air can hold at that temperature. Assuming sea-level conditions with 100 per cent relative humidity at 26°C, he said: “If the awg, in these conditions, was to suck in 1,000 cubic metre of air, it would generate 20 litres of water.”

Water vapour high up in the atmosphere is most important in deciding climate patterns, said Andrew Dessler, atmospheric scientist at Texas University in usa. Taking water out of the air near the ground would not have much of an impact, he added. “I don’t quite agree,” said Anand Sharma, director of the Dehradun Meteorological Office. Evaporation in the lower atmospheric levels has a cooling effect, he said. “None of the companies has studied the environmental impact of such operations,” he said.

How can one determine, for instance, whether it would not lead to lowering of moisture in a nearby agricultural field, Sharma asked. 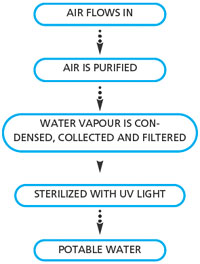 Air is sucked into the system via an electrostatic filter as used in air conditioners. A five-micron sediment filter then eliminates particles not removed by the pre-air-filtration process. Clean air passes through cooled coils that provide a temperature differential resulting in condensation. Water is then funnelled into a tank where it passes through two carbon filters; both adsorb chemical impurities. Another level of filtration eliminates bacteria. The final stage is the ultraviolet disinfection; pure drinking water pours out of the spout.