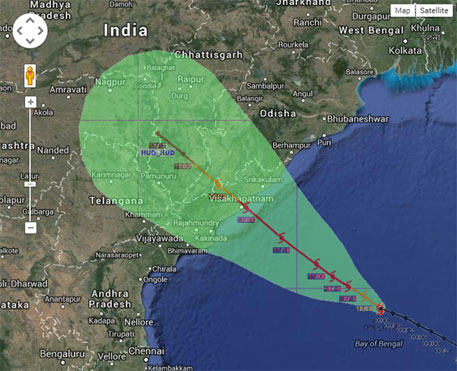 Cyclone Hudhud is expected to intensify into a severe cyclonic storm on October 10, according to the Indian Meteorological Department (IMD). It will make landfall between Visakhapatnam, Andhra Pradesh’s commercial hub, and Srikakulam, one of the poorest districts of the state.

With the Met office warning of extremely heavy rainfall over this region from the evening of October 11, the state administration has swung into action. All districts along the coast of Andhra Pradesh have been put on high alert.

In Visakhapatnam district, the administration has identified 50 villages in low-lying areas that could be inundated by the tide and is preparing to evacuate almost 80,000 people, according to a report in The Hindu.

“We have already opened a control room and have appointed a special officer to take stock of the situation,” District Collector N Yuvaraj told the newspaper. He informed that 671 mechanised boats are on full alert, cyclone shelters are being repaired to make them “operation fit” and enough food, water and medicine have been stocked to provide for the evacuees for a month.

No disaster plan for tribal areas

While preparations are in full swing at the district level, little attention has been paid to the tribal areas. Densely wooded hill slopes in Srikakulam and Visakhapatnam are home to the Bagatas, Gadabas, Goudus, Jatapus and Khonds, who will also be affected by the sweep of the cyclone and imminent heavy rains.

These areas lack basic public infrastructure like schools and panchayat buildings that can be used as shelters from the rains. With poor road access, the administration is expected to face severe challenges in supplying relief materials to remote villages.

The situation is no different in the southern parts of Odisha which have a large number of indigenous tribes, particularly vulnerable tribes living in undivided Koraput and Ganjam districts.
According to a report in The Hindu, the government has neither passed any information about the impending disaster, nor is there a plan to evacuate these vulnerable people to safer areas.

“The hills of Malkangiri, Koraput, Rayagada and Gajapati would receive heavy rain under the influence of Hudhud. Some tribal pockets could witness flash floods. The purported oversight of the administration is making the tribals more vulnerable,” said Umi Daniel, an expert on disaster issues, in the newspaper report.

In July 2013, incessant rainfall had washed away the access road connecting Bonda Hills in Malkangiri district, cutting off more than 6,000 Bonda tribes from relief for several days.