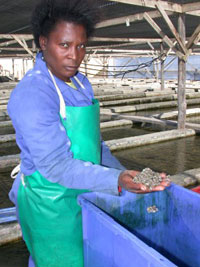 The Benguela Current Commission was established in 2013 through the signing of the Benguela Current Convention, a formal treaty that provides a legal framework for cross-border cooperation between the three countries. The countries would come together to promote integrated management, sustainable development and protection of the Benguela Current Large Marine Ecosystem (BCLME) which is an area of ocean space stretching from Port Elizabeth in South Africa to the province of Cabinda in the north of Angola. It is regarded as one of the richest ecosystems on the Earth. Offshore oil and gas production, marine diamond mining, coastal tourism, commercial fishing and shipping are some of the most important industrial activities that take place in the region.

The Benguela Current Commission provides a platform to the three SADC (Southern African Development Community) countries to introduce an ecosystem approach to the management of the BCLME. The commission is also focused on management of shared fish stocks, assessment and monitoring of the physical environment, establishment of an ecosystem information system, and cooperative management of biodiversity and ecosystem health.

The agreement is a five-year Strategic Action Programme (SAP) that aims to promote a coordinated regional approach to the rehabilitation, enhancement and sustainable use of the BCLME in order to provide economic, environmental and social benefits.

“The BCLME offers a myriad of economic opportunities for the countries    of the region   and it is essential that marine resources are utilised to their full potential to boost economic development. But, at the same time, the countries of the region are highly aware of their responsibility to balance industrial development with sound environmental management,” says Dr Hashali Hamukuaya, executive secretary of the Benguela Current Commission.