Three cheers for the paper 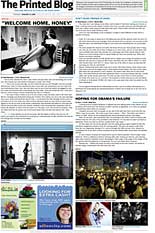 Many critics have passed their verdict on newspapers. The Internet will surpass them, they hold. An American start-up wants to start dozens of new ones--with a twist. The Printed Blog, a Chicago start-up, plans to reprint blog posts on paper, with local ads, and distribute them for free in big cities.

The first issues of this Internet-era penny-saver appeared in Chicago and San Francisco on January 27. They will begin as weeklies. Joshua Karp, the founder and publisher, hopes to publish free neighbourhood editions of The Printed Blog twice a day in many cities around the country.

But he does not have to look far to see the difficulties of being successful in the newspaper business these days. The Tribune Company, which publishes The Chicago Tribune and its free daily, RedEye, filed for bankruptcy protection in December. But Karp has supporters. "The free newspaper model is still workable," said David Cohen, a founder of Silicon Valley Community Newspapers, a group of free weeklies south of San Francisco that was sold to Knight Ridder in 2005 and is now owned by MediaNews.