Three cheers for them 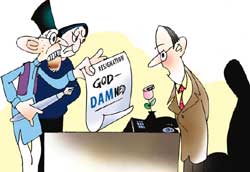 H nundred employees of Khabroon -- a leading Sindhi daily in Pakistan -- have resigned as a mark of protest against the management's policy to publish government advertisements in favour of the proposed Kalabagh Dam. The journalists who resigned en masse included the newspaper's editor Zaheer Mirani and news editor, Zulf Pirzado.

The Kalabagh dam is under construction since the 1970s. The people of Sindh oppose it because they believe that agriculture in this lower riparian province would suffer once the dam takes away water upstream to the province of Punjab.

Pirzado claims that when the daily was launched, "We had an agreement with the management that a pro-Kalabagh line will not be entertained. So, when the newspaper carried a pro-dam advertisement on December 22, 2006, we resigned." But Adnan Shahid -- one of the proprietors of the newspaper that's published simultaneously from Karachi, Hyderabad, Sukkur and Islamabad -- rejected this claim. "It's incomprehensible that the management and employees can enter into such an agreement. When a journalist is hired by a newspaper he or she has to comply with the paper's policies," he said. But, said, Mazahr Abbas of the Pakistan Federation Union of Journalists, "This is a serious blow to press freedom. We are shocked that Khabroon's management has filed a petition in the Supreme Court, urging it to take a decision on the construction of Kalabagh dam."