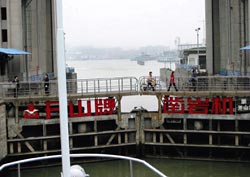 The last gap in China's controversial Three Gorges Dam has been plugged, making the world's largest hydroelectric power project a reality. By 2009, the area will turn into a 560-kilometre lake, after displacing a million people and flooding 1,500 towns and villages. Some remaining oustees are refusing to hand over their homes for demolition.

Work started on the dam in the late 1990s. At that time, critics considered it a throwback to the past when big dams were seen as the solution to the developing countries' problems. Later, the World Bank stopped funding the Three Gorges Dam and the Sardar Sarovar dam, being built on the Narmada river in Gujarat, India.

But big dams seem to be staging a comeback, especially after the World Water Forum in Kyoto, Japan, in March 2003 approved a declaration calling for privatisation of big money water projects.