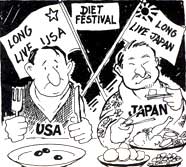 A FAT-RICH diet, widely believed to be unhealthy, acts as an elixir for the Japanese, the world's longest-living people, claim old-age researchers.

Before World War II, the lifespan of the Japanese was the lowest in the developed world. "Our cholesterol (counts) used to be very low," says Takao Suzuki, director of the Tokyo Metropolitan Institute of Gerontology. "Then, we started taking animal fat."

Today, Japanese prefer high-fat dishes such as heavily marbled pork steaks that are battered, breaded and dunked in boiling grease.