Tick of the body clock 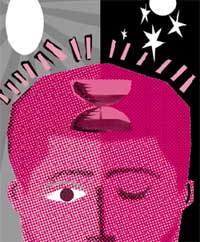 a team of researchers believes it has found another component in the complex system that makes us sleep at night and wake up in the morning. Humans have an automatic system that responds to day and night. Researchers think that figuring out factors that promote wakefulness and sleep could, in principle, be used for making much better drugs for sleep disorders. However, the method by which the body sets and adjusts the rhythm is still relatively little understood. Now, researchers from the Harvard Medical School in Boston, usa, claim that they have found a link in the chemical chain by which the body sends orders to regulate the cycle (www.news.bbc.co.uk, December 29, 2001).

The chemical they have found in experiments using hamsters and mice is a growth factor called tgf-alpha. It appears to be present in both parts of the brain linked to the sleep-wake cycle, and also the hypothalamus (gland which secretes the hormones key to controlling the body's slumbers). The research also suggests that receptors on the hypothalamus, which are primed to receive tgf-alpha, may not simply be getting information from the brain, but also from the retinas of the eyes. This is because there are also signs that tgf-alpha is produced there as well. This could mean that the amount and timing of the light coming through the eyes is able to effect an adjustment to the body clock, allowing someone to change their sleeping and waking habits in tune with the changing seasons.

However, not all experts are convinced that tgf-alpha necessarily represents the key to understanding the mechanism lying behind the body clock. Michael Hastings, from Cambridge University, uk, said that this growth factor was not a valid target for future treatments because it performed other tasks elsewhere in the body, and interfering with it in relation to the body clock could have a damaging effect.