Tickling does not amuse the psychologists. For them, it's not a laughing matter 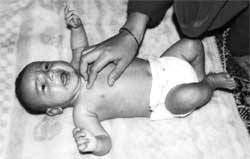 for some researchers, tickling is serious business. Tickling is, in fact, a mystery that puzzled Socrates, Galelio, Darwin and still continues to mystify their 20th century counterparts.

Armed with "tickle machines" and video tapes of such tv programmes as Saturday Night Live , two scientists from University of California, usa, recently attempted to untangle the mystery of tickling. Psycholo-gists Nicholas Chris-tenfeld and Christine Harris say that contrary to popular belief, tickling is not essentially asso-ciated with happiness. Tickling, they claim, is laughter caused by a simple reflex action (Cognition and Emotion , Vol 11, No 4).

It was in late 19th century when Charles Darwin and Ewald Hecker, a German psychologist, suggested that humour and tickling share underlying similarities. To test this hypothesis, three groups of volunteers were employed.The first group was tickled for 10 seconds or till the tickling became intolerable, and was then shown videotapes of stand-up comedy routines and clips from comedy programmes like Saturday Night Live . For the second group, the order was reversed: they saw first saw the tapes and were tickled later. The third group watched a patently unfunny programmes and was then tickled pink. Neither the first or the second group laughed any harder at the tapes or while being tickled. If humour and tickling are indeed related, then subjects should laugh more when tickling follows humour or vice versa. But the experiment's results show tickling simply creates a superficial feeling of happiness or pleasure. In fact, the third group, who watched animal biomechanics, loathed being tickled.

According to Harris, this indicates that many people, even while they find it unpleasant, laugh it off when tickled. Ticklish laughter, Harris concludes, rather than being social interaction appears to be a reflex action.

Scientists explain tickling and laugher are universal among humans, suggesting that they serve some crucial evolutionary purpose, playing an important role in the bonding between infants and their parents.