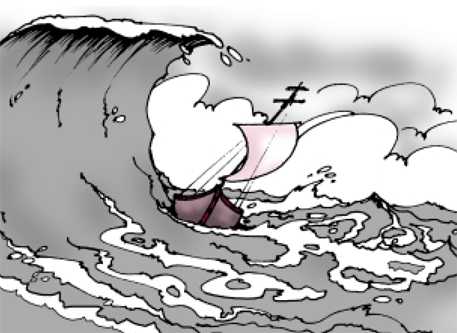 IF El Niño and La Niña, the periodic warming and cooling of the Pacific, are the short term agents of climate change, some scientists believe they may have identified a comparable oscillation, which could well result in weather variations for a longer period of time, from centuries to millenniums. Deep ocean currents create a global conveyor belt that transports great amounts of heat around the world.

Strong currents, for example, in the North Atlantic region and Western Europe, result in relatively warm weather and, as they weaken, they cool off. Some experts now suggest that the Little Ice Age (14-19th century) was a result of this cooling. By analysing ocean sediments in the North Atlantic Sea, researchers at the Lamont-Doherty Earth Observatory (LDEO) of Columbia University, USA, reported two years ago that cold spells lasting several centuries have occurred regularly.

Since the end of the last full Ice Age some 10,000 years ago, the researchers say they have been occurring at intervals of 1,400- 1,500 years. Much bigger temperature swings occurred at the same intervals during the Ice Age itself. Now, in the light of earlier findings, Wallace S Broecker, a marine geochemist at LDEO, and his colleagues postulate that deep ocean currents may be responsible for the 1,500-year cold cycles (The New York Times, November 9, 1999). Richard Alley, a climate expert at the Pennsylvania State University, USA, believes Broecker’s theory provides a possible new explanation for “a fundamental beat to the climate”.

It offers “a very possible story” to whether global warming is a result of natural changes or human-induced changes, mainly emissions of heat-trapping gases like carbon dioxide. The ocean conveyor belt, which Broecker talks about, is believed to be driven by changes in the salt content of the ocean’s surface. When salt builds up in a particular spot in the North Atlantic, it eventually makes the water dense enough to sink to the ocean depths. Other water rushes in to replace at the surface.

This combination is what sets the conveyor moving. The bigger and stronger the main conveyor current, the more heat it can transport. Besides North Atlantic, there is another region where the effects of the conveyor belt gets a boost — Weddell Sea near Antarctica. By combining the results of a number of chemical and physical studies, Broecker reveals that the southern and northern sites show different effects. When the North Atlantic region is cold, as in the end of the last Ice Age, Antarctica has been relatively warm.

A recent study by Gary Clow of the United States Geological Survey in Denver, Colorado, USA, also suggests that Antarctica has been warmer whenever Europe was colder, as in the Little Ice Age. Though no firm cause-and-effect link has been established between the conveyor’s supposed oscillations and the 1,500-year recurrences of cold spells, Broecker says large-scale circulation in the ocean can have very important effects on the atmosphere. “We are playing with a system that we still don’t understand,” he sums up.