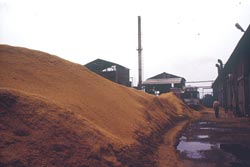 sixteen rice millers of Burdwan and its adjoining districts in West Bengal have joined hands to sell carbon credits to developed nations by switching over to a non-polluting mode of power generation. If their plans come to fruition, they may reap financial rewards under the Kyoto Protocol's Clean Development Mechanism (cdm).

Since last year the mill owners, who earlier used carbon-emitting diesel generator sets to meet their need of 200-300 kilowatts of power, have switched to environment-friendly husk-based gasifiers. The West Bengal Renewable Energy Development Agency (wbreda), a state government-run body that promotes alternative energy sources, is behind the initiative. Under wbreda's guidance the mill owners have set up an association called the Rice Mill Owners' Green Power Consortium.

Their proposal is almost ready and will soon be submitted to the Union ministry of environment and forests. If the ministry gives its nod, the cdm Executive Board will finally clear the venture. cdm is a 'flexibility mechanism' that allows industrialised countries to cheaply meet their Kyoto commitments to bring down greenhouse gas (ghg) emissions by making these reductions in developing countries. Industrialised nations invest in clean projects, which are sited in the developing world and emit smaller quantities of ghgs.

"Though not many are conversant with the concept at present, cdm would have a place in India's industrial and agricultural production in next two to three years," believes wbreda director S P Gonchowdhury. "This is the first time in the country that cdm is sought to be adopted by way of such an energy production process. And for West Bengal, the experience of selling carbon credits is totally new," claims Gonchowdhury.

"Currently, the rate of reduction per tonne of carbon is us $5 to us $7 for developing countries. So if emission levels are reduced by one megawatt annually, the millers would be richer by Rs 25 lakh," explains Gonchowdhury. "While 16 of the 670-odd rice mills in the state are participating in the venture, some 14 more are keen to join the consortium," he adds.

The consortium is being advised by international management consultant Ernst & Young and hopes to secure a fund of Rs 1 crore from countries such as Germany, Australia and Canada. Mill owner Banshi Sham, the spokesperson of the group, is optimistic: "We are greatly motivated. Our consortium has units from Burdwan, Hooghly, Bankura and Birbhum districts. We are now trying to rope in more millers, and have also organised a seminar to inform people about the facility."

Gonchowdhury feels that other polluting industries would also avail themselves of the benefits of cdm once they cut emissions. "As per the Kyoto pact, all units that started using carbon emission reducing methods of power generation after 2000 can gain from cdm," he points out. However, Ben Pearson of cdm Watch, a non-profit organisation that analyses such projects, appears sceptical: "These ventures sound eligible as cdm projects in that they are switching from a fossil fuel-based power system to biomass. The emissions are, therefore, lower. But the question is are these projects additional (exclusively for the purpose of cdm)?"

According to Pearson, the executive board had rejected almost all projects submitted to it earlier this year for want of "additionality". He stresses: "The project developers will have to show that the switch was made in the expectation that they would get carbon credits, and that this would make it financially viable to use biomass."