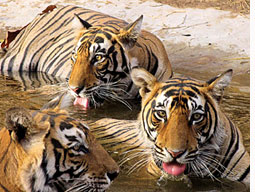 a tiger cub went missing from the Ranthambore National Park, Rajasthan, in early November. Officials of the Rajasthan Forest Department are still looking for the cub. Villagers in the neighbourhood have been asked to keep their domestic animals safely. The cub, called Yuvraj, had run away from the park in 2006 too, but had returned on its own.

Cases of missing tigers are not unusual. Two tigers had disappeared within two months in 2007, and five cubs went missing in 2004-05. Experts say there isn't enough space to house tigers in the 392 sq km park. There are 45 tigers in the park at present.

According to forest department officials, a tiger needs around 40-45 sq km space to move around freely. Officials say they need another 40 sq km of additional area to prevent such events. "Adult tigers make their separate territory. But we fear young tigers are also leaving the park because of lack of space. Our department is monitoring the issue seriously," says R N Mahrotra, the chief wildlife warden of the park.