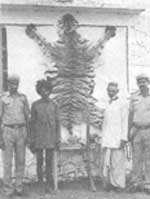 RANTHAMBHOR National Park in Rajasthan is in the news, thanks to rampant poaching in the tiger reserve. This year's tiger census in the park shows their number has fallen from 46 to 18 in just one year. But even this is a rough estimate as only 13 tigers were physically counted. The latest count means the tiger population in the part is perilously close to 14 -- the number when Project Tiger was launched in 1974 with much fanfare.

Matters have come to a head with the appointment of separate independent commissions by Central and state governments to investigate tiger poaching. The Union ministry of environment and forests' task force is headed by inspector general of forests C D Pandeya; the Rajasthan government's investigatory agency is headed by state revenue secretary Ranjit Singh Kumat.

Trade in tiger skins is lucrative: In the international market, a single tiger skin could fetch as much as Rs 10 lakh. The skins and bones ultimately make their way to Nepal and then on to China, Taiwan and Hong Kong, where the bones are used to make aphrodisiacs and traditional medicines.