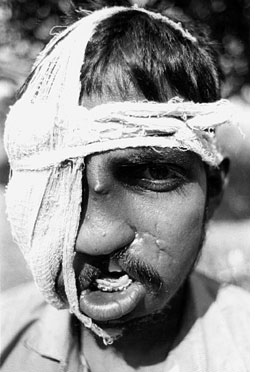 on january 1, 2008, the government after much vacillation notified the rules of Scheduled Tribes and Other Tradi- tional Forest Dwellers (Recognition of Forest Rights) Act. The day before, it had notified "critical tiger habitats" in 28 existing and eight proposed tiger reserves. It scored on both tiger conservation and protection of tribal rights. A closer look at the notifications reveals that much has slipped between the drafts and the final legislation.

The forest rights act has also come in conflict with the supreme court's Central Empowerment Committee's recommendations on regularization of settlements in forest (see box Court vs forest rights act).

The forest rights act has introduced a new category, the "critical wildlife habitats" within sanctuaries to be kept free of human habitation.This was to ensure that the rights of tribal people and other traditional forest dwellers would not be affected unless it was decided after scientific study that the area had to be kept inviolate for wildlife, in which case they would be relocated. The bill introduced in the Lok Sabha in December 2005 had a different formulation for this conflict between tribal land settlement and wildlife conservation. It said that tribal people who lived in the core areas of sanctuaries and national parks would be given provisional rights for five years. If they were not relocated within this period, the rights would be made permanent. The term 'critical wildlife habitat' was included in the bill in the Rajya Sabha in 2006. This has complicated matters.

The wildlife lobby has argued that unless the critical habitats are notified government must not notify the forest rights bill. Its interpretation was that if this was not done then land settlement would take place in all wildlife areas. The complication is that till date there was no provision for declaring an area critical. The Wildlife (Protection) Act, 1972, legislates for the creation of sanctuaries and national parks with different degrees of protection. Even the terms core area and buffer areas, which have been used commonly in the management of the protected reserves, have no legal basis. The 2006 wildlife amendment bill, also known as the tiger amendment bill, was also modified in Parliament to introduce the category critical tiger habitats. Not surprisingly then, this inclusion has been used by the conservation lobby to press the government to bring almost entire area of tiger reserves under critical tiger habitats. In addition, eight proposed new tiger reserves have been added in the identified critical category.

The government claims that according to requirements of the act, an expert committee was formed and states asked to convene meetings and finalise the areas. As a result 31,940 sq km has been notified as critical tiger habitat, almost the entire area of existing tiger reserves. It also says that there are 273 villages inside the identified area that will need to be relocated. Curiously, the Tiger Task Force report commissioned by the prime minister in 2005 also identifies 273 villages inside the core areas of 28 tiger reserves, though it says that the area covered by the core is only 17,600 sq km. It estimates over 1,500 villages inside these reserves.

"The previously used core areas were mainly for administrative purposes. There was no scientific basis for them," says Rajesh Gopal, member secretary, National Tiger Conservation Authority. "Critical tiger habitats have been identified based on the criterion that they can hold a minimum of 20 breeding females," he adds.

This has alarmed forest rights activists, who say creating inviolate areas could mean moving about a million people out of tiger reserves. "There is not a single block within Buxa Tiger Reserve that is not inhabited, and the forest department knows very well that people of the Sunderbans venture into the forests to collect forest produce," says Soumitro Ghosh, a West Bengal-based activist. "Why does not the government first settle the rights issue and then go for identification of critical habitats," asks R Sreedhar, coordinator, Academy for Mountain Environics, an ngo for community development. While the government says it has followed proper procedure, activists allege that the guidelines for identifying critical habitats do not follow the provisions in the act.

Activists got strength after media reports revealed that in late November the conservator of forests of the Kodagu Forest Circle in Karnataka had written to the principal chief conservator of forests and the chief wildlife warden to withdraw the directions issued to him to identify inviolate areas, terming the order illegal and unethical. "It seems the government has not taken the consent of gram sabhas concerned and settled people's rights in those areas," says Ashish Kothari, member, Kalpvriksh, Pune.

Government officials say that the government has only notified critical tiger habitats and the process of making them inviolate is yet to begin. It said the resettlement plan, providing an enhanced compensation of Rs 10 lakh, is ready and will be implemented after settling the rights of the people. "The issue is not whether there are villages inside critical tiger habitats. The issue is whether their rights are recognised and procedures for resettlement followed as laid down by the act. This will start soon," says Gopal.

But it seems the battle is not over. On the one hand, conservationists are demanding identification of inviolate areas for other wildlife, from gharials to elephants. On the other hand, tribal groups are up in arms alleging that the government has not followed its procedure in identification of the critical areas. They also claim that the government has diluted the act (see box Forest rights diluted).

Is it a case of trying to please everyone and pleasing none?