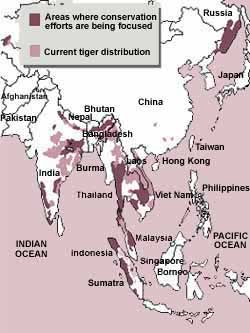 The largest of all cats, tigers, are gradually dying due to a loss of habitat, diminishing stocks of prey and poaching. About 100,000 tigers lived in the Asian wilderness at the beginning of this century. Only about 5,000 or about five per cent are believed to remain today. Poaching is on the increase due to the high value of tiger bone which is used in traditional Chinese medicine. A survey by the wildlife trade monitoring network (TRAFFIC) -- an arm of the Convention on International Trade in Endangered Species of Wild Fauna and Flora (CITES) found that medicines containing tiger parts are easily available in North America, although such imports have been illegal since 1973.

Conservation groups around the world have designated 1998 as the year to save the tiger. Recently, the World Wide Fund for Nature (WWF) announced an emergency fund of US $200,000, which will be part of a conservation fund for tigers. Specific areas in India, Burma, Laos, Combodia, Thailand, Malaysia, Indonesia, China and Russia have been identified where efforts will be make to halt poaching, safeguard the tiger habitat and rebuild the base of prey to safeguard tiger survival.