Tightening nuts and bolts in the ITIs 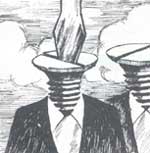 WITH INCREASING emphasis being placed on upgrading of technical training, Indian institutes providing such training are seeking help in this area from multilateral agencies.

The World Bank is funding two such projects that are being implemented by the ministries of labour and human resource development (HRD). The projects aim to put the country's blue-collar and brown-collar workers in touch with state-of-the-art technologies. The seven-year projects were planned to run in two phases. Action plans for the second phase, currently on, are being formulated.

The project under the HRD ministry is to upgrade the skills of polytechnic-trained, middle-level technicians -- foremen, inspectors and supervisors. The World Bank sponsored the Rs 1,800-crore project, which took off in December 1990 in eight states. Nine more states have been included in the project in January 1992.

The second project, under the labour ministry, began in 1989. Intended to upgrade the Industrial Training Institutes (ITIs) and Advanced Training Institutes (ATIs), the project has got US $280 million (Rs 868 crore) from the World Bank, and Rs 310 crore from the government. It will cover 400 of the country's 2,400 technical training institutes.

Another Rs 102.3 crore has been set aside for an apex institution, likely to be set up near Bangalore, where advanced industrial technologies will be taught. The training will include relatively arcane areas such as robotics and automation, computer-aided design and manufacture, computerised quality control, fibre optics, sea-bed mining, medical electronics and environmental engineering.

Also on the curriculum are traditional areas which are chronically short of trained manpower -- dairy technology, tool and die making, automobile engineering, footwear design and manufacture, pisciculture and sericulture, and plastic and polymer technology, to name a few. The thrust of the endeavour, however, is on improving the quality of the teaching.

However, the projects have been implemented desultorily. While Gujarat, only half-way through the project, has already raised enrolment of women in technical courses by 25 per cent against its target of 15 per cent, Bihar and Uttar Pradesh have not organised the projects properly. Bihar has also sent very little data on the progress of the projects. Rajasthan has appointed 94 teachers as against 1,590 in Gujarat.

"Technology is moving so fast that every new machine generation creates a fresh batch of illiterates," says one labour ministry official. "For instance, all high-quality metal-cutting these days is done with CNC (computerised numerical counter) technology. The CNC machines cost Rs 30 lakh each and you simply have to get staff with a higher level of skill to work them." And that means ensuring that the teachers, too, keep abreast of new technologies.