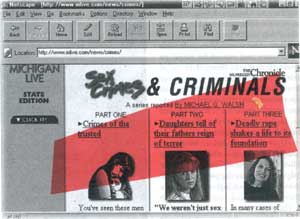 WHEN Sharon Lopatha of Maryland, USA, disappeared in 1996, the police checked her home computer for clues. They learnt she had posted messages in a forum devoted to sexual sadism. Her body was found buried in the front yard of a man who browsed the same forum. In another instance, the police in Holden in Massachusetts, USA, arrested a convicted sex offender from Michigan in July this year. They say he drove there to meet a 16-year old girl with whom he had corresponded in an Internet chat room. The girl, say police sources, was running towards his car with a suitcase when they stopped her.

Internet is the new stomping ground for sex offenders in the US. And the police, in most cases, are helpless against these cyber criminals who thrive on the Net's anonymity. But the long hand of the law is not far behind. Veteran gun-slinging detectives, armed with well-thumbed copies of Internet for Dummies, are hard at work, surfing the Internet trying to hunt down sexual predators who use the anonymity of electronic chat rooms and e-mails to find victims or trade pornographic material. The only consolation is that the anonymity factor works both ways. It might provide a safe cover for the criminals, but it also gives the police the perfect undercover tool.

James McLaughlin, a veteran of the police force at Keene in New Hampshire, USA, is one such cyber cop. Before his wife brought home a secondhand computer, he knew absolute zilch about the World-Wide Web. But now, you will find McLaughlin on-line and ready for action. Surfing the Net daily and checking the various x-rated forums has become a daily job for him, he says. McLaughlin has hit upon a novel plan to close in on these criminals: he poses as a teenager to lure those looking for sex with youngsters. His online anonymity allows him hunt down the hunters. "In less that a year I've busted more than 60 people," he says. He has brought charges against those who have travelled across state borders to have sex with children and distributing child pornography. McLaughlin's success has prompted the US Federal Bureau of Investigation (FBI) to adopt his technique. This year, the FBI hired as many as 60 employees with computer expertise and is currently spending US $10 million to fight computer sex crimes.

"This isn't a crime that's going to go away. As more and more people get online, the problem will grow in proportion," says Doug Rehman, a former state of Florida investigator who now teaches others how to combat computer vice. "There are Web sites dedicated to hacking, cult recruitment and dangerous pranks," he adds. Back at Keene, McLaughlin recently helped FBI agents bust a New York-based man who met with more than 20 teenagers he had contacted on-line.

But not everyone shares the law-keepers' views. Supporters of Internet privacy feel that the police are harassing a lot of innocent people in their attempts to stop Net-related sex crimes. The police officials, however, are taking no chances. Perturbed by the chilling cases that have been reported till now, they say their crusade against cyber sex criminals will go on. "We've sent a message to these criminals on the net," says McLaughlin, citing a recent case where a European man refused to give his real name and address to him on a chat forum because he knew that the New Hampshire police had arrested several men on sex-related charges. "Stay away from New Hampshire kids. That's our message to these people," says McLaughlin.