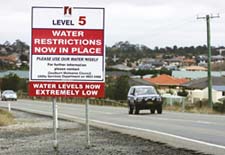 with Melbourne city continuing to reel under drought for the tenth consecutive year, the Victorian state government has announced tighter mandatory restrictions for water use in the state capital. On January 15, 2007, the state's acting premier and water minister, John Thwaites, announced the list of new residential estates that were to have mandatory recycled water.

The initiative aims to supply recycled water to more than 40,000 new homes in Melbourne's outer east, between Cranbourne and Officer, and save four billion litres of water every year. Melbourne Water, the government supplier of water, has already started installing dual pipes that will help segregate use of water for drinking and other purposes. New hardware like purple taps, pipes, hoses and meters will be installed under the plan.

Besides, restrictions like a ban on watering of lawns and use of hose to wash cars will also be placed. According to Thwaites, by mandating recycled water for gardens, toilets and washing cars, each of these homes would cut down drinking water use by one third.