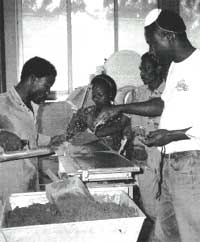 Low-cost housing has remained on the agenda of policy makers for long now. Various options have been tried for building a dream house that would not only be affordable to the multitudes but will also retain an aesthetic appeal. The innovative tile built recently by the research team led by Sande Oladele of the Ecole Nationale Superieure des Travaux Publics (enstp) in Yamoussoukro, Cote d'Ivoire in the African continent, could perhaps allow for the construction of such inexpensive yet appealing houses ( idrc Report , Vol 23, No 4).

As in most African countries, materials for the building of roofs in Cote d'Ivoire are imported, causing a huge outflow of currency. However, these imported materials are unsuited to the African environment. While traditional raw materials like straw and palm leaves are used widely for roofing purposes, there are chances of them getting burnt. With such a background, Oladele and his team set about designing a tile that would be long-lasting, economical and also cost-effective.

Oladele settled for terracotta which, however, could be made into a tile only after the consumption of a lot of energy, thereby making it expensive. The trick was thus to use such materials in conjunction with terracotta so that the expenses come down. In a project funded by International Development Research Centre ( idrc) and in association with the National Research Council of Canada, a subsidiary of the Institute for Research in Construction in Ottawa, enstp scientists involved themselves in the 'Vegetable Tiles' project which came into existence in 1989.

An earlier tile which was made with sisal fibre did not stand up to the test of reliability, which led to its replacement by local raw materials like coconut and rice by Oladele's team. Less cement was also used by adding a combination of kaolin and vegetable ash rich in silica. The new micro-concrete tile has won the approval of Codinorm, the agency responsible for issuing standards with respect to quality, in Cote d'Ivoire. Its low cost has made it popular among architects and builders in the region. Further, the tile-making equipment including an adaptation of a mortar mould and a battery-operated vibrating table has been made affordable so that it reaches a wider cross-section of people.

Oladele and his team have developed yet another variety of tile which uses coarse sand instead of plant fibres. The micro-concrete tile is ecologically compatible and economically viable as well considering the numerous sand pits which abound in Cote d'Ivoire. Its other attributes include impermeability to water, longer-lasting, reliability, and attractiveness. enstp researchers are now considering setting up a regional centre which will look solely into the aspects of providing information on local building materials and will continue researching to evolve newer types of eco-friendly concrete.