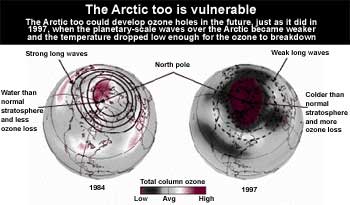 most of the world's ozone-depleting pollutants are emitted in the Northern hemisphere. Yet Earth's yawning ozone hole straddles the South Pole -- not the North Pole. Why? New research confirms what scientists have long conjectured: giant atmospheric waves spawned by land features such as the Himalayas damp the formation of a northern ozone hole and, as a result, the Arctic zone remains safe from unwelcome doses of solar ultraviolet radiation. But that could soon change, caution researchers. Climate change could undo the work of those waves and make Arctic ozone holes more common and larger in the future.

Small ozone holes have in fact been recorded over the Arctic before, like the ones observed in the spring of 1997. But such events are the exception rather than the rule. The chemistry of ozone destruction requires cold air temperatures in the stratosphere, and the Arctic stratosphere just isn't as cold as its Antarctic counterpart to create the hole in the ozone layer.

The temperature difference between the North and the South is an indirect result of the uneven land distribution around Earth, the new research has been able to show.

Most of our planet's land and its highest mountains are in the northern hemisphere. High mountains and land-sea boundaries combine to generate vast undulations in the atmosphere called 'planetary-scale waves' or 'long waves'. These waves act to heat polar air. Planetary-scale waves are so large that some of them wrap around the whole of the Earth.

Unlike water waves, which displace the water up and down, planetary waves, as they travel around our planet, displace air towards the North and the South. They form in the troposphere (the lowest part of the atmosphere) and propagate upward, transferring their energy to the stratosphere (which ranges from 10-50 kilometres above the Earth's surface).

"The Himalayan plateau saves the arctic from getting colder," says Paul Newman, an atmospheric physicist at the us National Aeronautical Space Administration' s Goddard Space Flight Center. Newman is the lead author of the paper published last month which presents satellite and meteorological data linking planetary waves to bursts of warming registered in the Arctic, a connection that scientists long-ago recognised but have only now quantified. "Typically, a wave will warm the polar region by 5-10c," Newman explains. "A 'warm' polar stratosphere is typically in the temperature range -73-63c. Of course, as soon as the wave has dissipated, the polar region begins to cool down again."

But the Arctic cannot be saved for long or forever from the repercussions of the Northern countries using ozone depleting substances, such as chloroflouro carbons.

Planetary waves in the northern hemisphere don't always heat the stratosphere enough to prevent substantial ozone destruction. In 1997, for example, the waves were weak because of capricious weather. That triggered a rare springtime ozone hole over the Arctic. Scientists are concerned that climate change could make such times more common. "If our models of Arctic stratospheric cooling are correct, we would expect lower ozone values across the Arctic during this century," says Newman ( www.science.nasa.gov , October 11).
It so happens that stratospheric cooling can be a curious result of or exacerbated by global warming as well. Greenhouse gases, which trap the heat radiating from the Earth's surface in the lowest layer of the atmosphere, reduce the heat that reaches the stratosphere. In effect, greenhouse gases cool the stratosphere by insulating it from the warmer Earth below.

Climate changes associated with global warming might also weaken planetary waves -- so predict some computer models. The cooling of the stratosphere due to this indirect effect could be more significant than the cooling caused directly by greenhouse gases. However, Newman cautions that this result is still very uncertain. A lot of questions about the fidelity of the computer models remain unanswered.