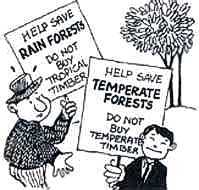 Malaysia is gaining support to fight industrialised countries who are pressing for a ban on logging in the tropical rainforests. Its partners in the Association of South-East Asian Nations (ASEAN) have supported its stand and agreed to dissuade other countries from following Austria's lead and imposing mandatory labelling on tropical timber imports. At a meeting in Bandung, Indonesia, agriculture ministers of the six ASEAN countries took a serious view of the Austrian move, which is meant to discourage people from buying wood that "destroys rainforests". "We are of the opinion that if such action is to be imposed, it should also involve temperate timber," they said.