The environment ministry is in trouble in the Andaman and Nicobar islands, where it has violated timber extraction limits. 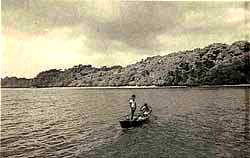 WHAT HAPPENS when the environment ministry violates environmental rules? The home ministry admonishes it. Or so it would seem from the predicament environment minister Kamal Nath finds himself in -- he has been asked by home minister S B Chavan to explain why his ministry issued quotas far in excess of permissible limits for timber extraction from the islands of Andaman and Nicobar.

The IDA was the brain child of former prime minister Rajiv Gandhi, who set it up in 1986 and entrusted it with the task of balanced of the country's island.In 1989, when Gandhi went out of power, IDA also went into a period of decline until November 1992, when Prime Minister P V Narasimha Rao resurrected it. All IDA meetings have seen the environment and development ministries at loggerheads.

In the absence of alternative revenue sources, local development authorities have resorted to plantations and timber logging, and these have taken a heavy toll of the tropical rain forests in the islands. About 12 per cent of the total land area of the Andamans has already been clear-felled. Naturalists contend this has also affected the growth of evergreen flora on the islands because these are now being forced to cope with greater sunlight.

The IDA decision to phase out timber logging from the islands was a result of its concern over the depleting forests. In 1989, it was decided "wood extraction to feed wood-based industries should be stopped altogether in the next few years", and the MEF was asked to work out a phase-out schedule.In response to this, the MEF imposed a moratorium on further expansion of wood-based industries in the area and fixed the ceiling for timber extraction. The plantation area under red oil palm was also frozen at 1509 ha.

These environmental impositions, however, faced resistance from the timber lobby. Timber companies, led by the Andaman Timber Corp (ATC), have made repeated representations to the MEF on the crippling impact of the new forest regulations on their business.

Local political leaders eager to speed up development also view "environmental concern" as obstructionist. The islands' lone Parliament member, Manoranjan Bhakta, says, "To say don't touch forests is not realistic. You can't refuse basic amenities to the people in the name of forests. In the island of Kadamtala, the new settlers were not even allowed land for agriculture in the name of forest protection."

Meanwhile, auctioning of islands for promotion of tourism has become a contentious issue between the tourism and environment ministries. The tourism ministry had proposed the auctioning of three uninhabited islands in Lakshadweep to develop international tourism, but the MEF was prepared to clear only two -- Thinnakara and Cheriyam. Development of the third island -- Suheli-Valiyakara -- was vetoed because it was "most valuable for its coral reefs".

Tourism activities on the islands have come in for sharp criticism from Delhi-based environmentalist groups as well. Romi Khosla, an architect and former non-official member of IDA, is critical of the way islands were getting auctioned and hotels were being set up in contravention of IDA recommendations."The government called for international tenders to open up more hotels on the islands, but they did not specify the carrying capacity or the environmental constraints," says Khosla. When a tender was floated for a 100-room hotel at Thinnakara island in Bangaram lagoon, Khosla wrote a letter to the MEF, in which he pointed out that "the carrying capacity of the island does not permit more than five to six rooms because it does not have adequate fresh water".

IDA will find it difficult to reconcile conservation with development for, as Bhakta put it, "environmentalists might be looking at IDA as an island conservation authority, but the islands cannot be made into museum pieces."