Time to define the new normal

It wouldn't be inaccurate to say that the 2017 monsoon has been all about floods. At least 11 states experienced floods since the onset of the monsoon in June. Till the magazine went to print, 150 districts, or over a fifth of the country’s districts, have received more than 100 mm of rain in a single day. More than 1,000 peo ple have died and several millions affected. The situation has not abated.

But as we enter the final month of the monsoon, it would seem paradoxical to say that the monsoon of 2017 is also about a drought looming over large parts of the country. Around 40 per cent of the districts have received deficient rainfall. Parts of north, central and south India are about to face a drought. The distribution map issued by the India Meteorological Department (IMD) shows a large corridor of deficient rainfall areas (see map).

Consider this: only less than a fourth of the 400-odd weekly monsoon observations from June 1 at the 36 meteorological subdi visions recorded a normal rainfall. Yet, IMD has categorised all four geographical regi ons within the margins of a “normal” rain fall. That means extreme rainfall for a few days has compensated—and in some cases over-compensated—for the striking defici ency, indicating widespread imbalances in rainfall distribution.

Rajasthan is a glaring example of this imbalance. In the third week of August, the state registered an excess of 20 per cent rainfall. While western Rajasthan, prima rily a desert, recorded an excess of 58 per cent, eastern Rajasthan recorded 1 per cent deficit. Chandigarh, on the other hand, did not get a decent spell of rain till August 21, and had a rainfall deficit of over 24 per cent. The deficit reduced to 8 per cent after the city received heavy rainfall on August 21. So sudden and heavy downpours are marking the new “normal”. Even Bengaluru, which faced unprecedented floods recently, has a rainfall deficit of about 8 per cent. 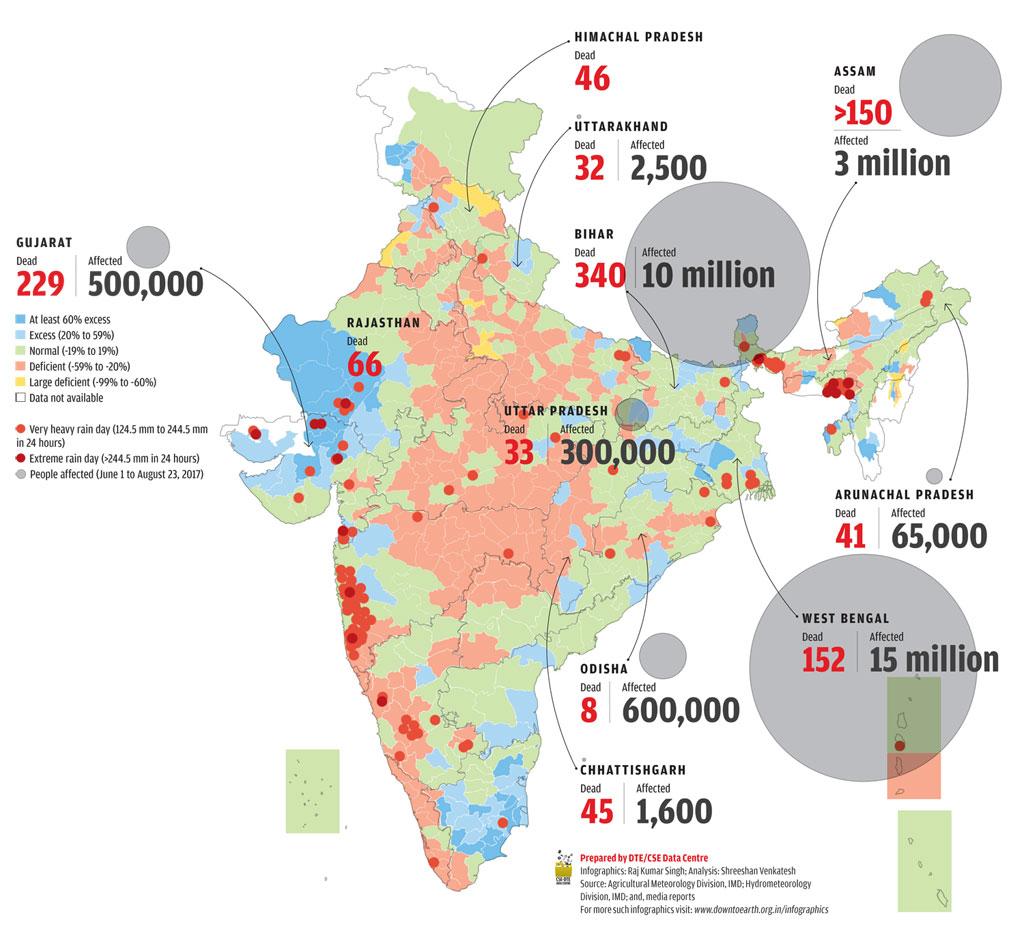 In stark contrast, the rain-rich regions of Kerala and coastal Karnataka received deficient rainfall, while the rain shadow region in southern Tamil Nadu received rainfall far above the normal, thanks to heavy downpours in August.

In drought-prone Marathwada and Vidarbha, the deficit stands at 32 and 28 per cent, despite strong pre-monsoon sho wers. Farmers in the regions have faced heavy deficit in seven of nine weeks—five of which recorded more than 60 per cent rainfall deficiency. Despite a third wave of floods, Assam has recorded a near normal rainfall. And while Tripura and Mizoram have received excess rainfall, Manipur and Nagaland have suffered heavy deficits.

Since April, IMD has been saying in all its forecasts that it will be a normal monsoon this year. But the performance of the monsoon can no longer be only accounted by the amount of rain as extreme rainfall days are increasing, triggering floods and crop damage. A “normal” monsoon should take into account the changing distribution patterns as well as atmospheric conditions. Only such forecasts will be able to predict floods as well as help farmers know when to sow.

There are damning errors too. For instance, pre-monsoon showers in Marathwada and Vidarbha were announced as “monsoonal rains” in the beginning of June. Thousands of farmers, who undertook sowing following the announcement, now stand to lose their crops following heavy rainfall deficits in the subsequent weeks.

Incorporating wind directions in its forecast and assessment methodologies would have enabled IMD to make an accurate prediction. Another atmospheric pattern that influences the monsoon, but finds little mention in IMD’s assessment is the western disturbances. It usually arrives in August but this year it arrived in July, causing heavy rainfall in several parts of north, northwest and central India.

It is time, the IMD defined its new “normal” as floods are taking a heavy toll on lives and property across the country. Meanwhile, farmers elsewhere await another year of drought.