ALMOST two years after it was found that fruits and vegetables in Delhi markets contain harmful levels of pesticides, the Centre has formed an expert committee to frame a policy to check pesticide residues in eatables.

Acting on a Delhi High Court order, the Union Ministry of Agriculture formed the seven-member committee on March 14 during a meeting with the Food Safety and Standards Authority of India (FSSAI), the Indian Council for Agricultural Research (ICAR) and health ministry officials. The committee is headed by Sarita Bhalla from Medical Toxicology Division of Central Insecticides Laboratory under the agriculture ministry. The committee has been asked to frame a policy for periodic checks to detect pesticides residues. Bhalla tells Down To Earth, “We are still in the preliminary stage and are yet to decide the key areas.” When asked whether the policy would be applicable to Delhi or the entire country, she declined to comment, saying the matter is sub-judice.

However, sources in the ministry say the policy would be applicable to the country. “The committee has been formed because there have been lapses on the part of all government departments, be it FSSAI, the agriculture ministry or the health department. None of them have been coordinating and all independent efforts have gone waste. The committee will form a policy that will make all of them work in tandem,” add the sources. The committee will look at various areas, like what remedial actions should be taken, and how frequently samples should be checked. It is not impossible to keep a check on pesticide residues in vegetables and fruits, the sources say. 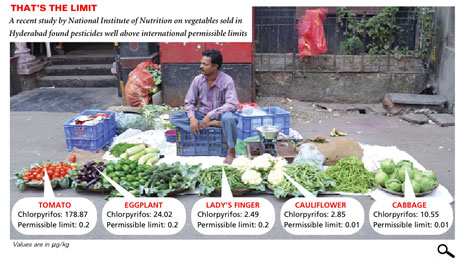 The committee is likely to convene its first meeting in April. The ministry of agriculture wants to take the policy on priority basis, although the court has not prescribed any time limit, the sources add.

The action was taken following a suo moto cognizance by the court of 2010 NGO report that different types of fruits and vegetables picked from Delhi markets were found to have pesticides content much beyond permissible limits. During a hearing on March 20, the court was informed about the formation of the committee, after which it directed the ministry to appoint an independent member who is an expert on pesticides. The court said the seventh member should be appointed by the next hearing, March 27.

In October 2010, Consumer Voice, a non-profit in Delhi, claimed that 35 varieties of vegetables and fruits picked from Delhi markets had high doses of banned pesticides (see ‘Findings of Consumer Voice study in 2010’).

Referring to the formation of the committee, Sisir Ghosh, head corporate affairs of Consumer Voice, says, “It seems the government has no will to keep a check on the rampant use of pesticides since it is taking so long to decide on a policy for it.” B Sesikeran, director of the National Institute of Nutrition (NIN) in Hyderabad, says the problem of pesticide residues in vegetables and fruits generally stems from peri-urban areas, where crops are grown by people who have been given no guidance on proper agricultural practices. “This unorganised sector is neither covered by FSSAI nor is it under any agricultural capacity building programme. As a result, there is no check.” The government needs to prescribe spraying time so that vegetables and fruits freshly sprayed with pesticides do not reach the market, suggests Sesikeran. He adds: “It would be a challenge to monitor this. The policy needs to have some concrete actions.”

A study conducted by NIN in January this year shows that pesticide residues in some of the vegetables and fruits sold at Rythu Bazaars or by street vendors in Hyderabad are well above the internationally stipulated maximum residual levels (MRL). Set by a country itself, MRL is different for every crop and pesticide.

The study, published in Food Research International, assessed residual pesticide levels in brinjal, lady’s finger, tomato, chilli and cauliflower. Lady’s finger (okra) was the most contaminated, with residues of 18 pesticides belonging to organophosphate class (see picture). Organophosphate irreversibly inactivates an enzyme that is essential to nerve functioning in insects, animals and humans. This class of pesticides can cause neurotoxicity upon prolonged exposure, said the study’s authors who blamed absence of protocols for MRLs for the rampant use. Referring to the lapses in MRL, G V Ramajaneyulu, former scientist at ICAR, says the main problem is that most pesticides used in the country are not registered with the Central Insecticide Board and Registration Committee. “As a result, chemical composition of a pesticide used does not match the required limit.”