Will pro-democracy talks include community forestry in Nepal? 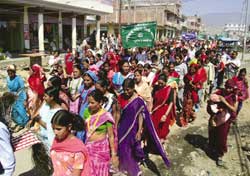 while Nepal's major political parties are trying to negotiate with the Maoist rebels in New Delhi for a common minimum programme and overthrow the government of king Gyanendra, in Nepal, the community forest right activists are trying to convince the democratic leaders to include community rights in the negotiation.

The Federation of Community Forest Users' Groups, Nepal (fecofun) -- the largest civil society group of the country -- has been trying to initiate negotiation between the Maoists and the political parties of the country through its pro-democracy movement.

"In the past two years, under the king's rule, the armed forces and the local administrators have repeatedly violated people's rights. Their right over forest, water and other natural resources can only be ensured in a democratic system," says Ghanshyam Pandey, coordinator of the advocacy unit, fecofun. "And it's the right time to convince the political parties that democracy's roots lie in communities," Pandey adds.

While the government's autocratic rule is suffocating the community forest users by violating their community rights and charging extra revenue from them, the Maoist people's government is doing no good either.

But the government blames these groups for helping the Maoists and has even set up security camps in the community forests. "We have information that the Maoists are using the forests and the user groups' money for their activities. Hence we have barred these people from entering the forests and have also seized their bank accounts," says Min Bahadur Pal, the zonal administrator of mid-western zone.

According to fecofun, in the mid-western zone of Nepal itself, the government has seized at least 81 bank accounts belonging to the community forests. As of now, 145 such forests are under the control of Maoists and the security forces.

Frustration among millions of villagers who are now ostracised from their own forests is quite palpable. They want a guarantee over their natural resources and have carried out a series of rallies opposing the intervention of the government and the Maoists in the community forests. The rallies are a part of the pro-democracy movement initiated by fecofun .

In Nepal, there are almost 15,000 community forest users' groups with 8.5 million members -- which is 35 per cent of the country's total population. These people manage forests spread over 1.2 million hectares and the revenue generated is invested in the development of the community.