A cordless telephone, about the size of a cigarette pack is Japan's sensational new entry to the world-wide mobile phone bazaar. It is now just a matter of time before its beep rings in Indian homes 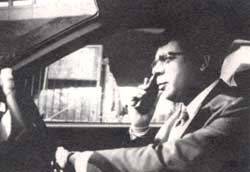 IT is very, very Japanese: small, slick and efficient. Called the Personal Handy-phone System (PHS), this mini cellular phone made its debut in Japan on 1 July, 1995. it is Japan's first homegrown telecommunications technology - a low-powered, low-cost version that can be utilised both as a mobile phone and a cordless phone, in homes as well as in offices. Around 33 Japanese companies are making PHS gear, and the technology is being backed by Japan's powerful ministry of posts and telecommunications. Tokyo newspapers are abuzz with numerous PHS ads. They are forecasting rather bullish trends too, because approximately seven million Japanese are expected to become subscribers by the year 2000.

In fact, PHS could be an ideal low cost phone system - just the thing for miIlions of homes throughout Asia, in' albeit, for those with the right kind of moolah. The system's potential is such that over the next five years, India, China, Malaysia, Thailand and other Asian nations plan to pump billions into the new phone infrastructure. Industry experts say the market for PHS- style minicellular setups in Asia could be as high as 100 billion sets by AD 2000.

The new handset costs between Rs 15,250 and Rs 20,650 which is half the cost of a regular cellular phone, while calls on the PHS would cost PU 13.72 for three minutes, which is one-third the rate charged for calls made on other mobile phones.

PHS operates in the same manner as regular cellular networks, but the range is much more limited. The system uses small, low-power base stations that can be installed easily and cheaply in residential neighbourhoods. But each station covers an area of only 200-500 in in diameter when compared with conventional networks which cover 10 miles. The signals are so weak that PHS cannot be operated from vehicles in motion. Also, the device cannot be used for making international calls or for calls to conventional cellular phones, problems which its inventors believe should be fixed within the next two years or so.