Tipsy hearts and the good life 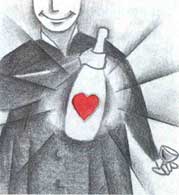 RESEARCH at Delhi's All India Institute of Medical Sciences (Alims) has borne oud the belief that moderate alcohol cosumption can protect people from cornary heart diseases (CHD). The studw reveals that moderate doses of alcow increase the level of proteins called higb density lipoproteins (Hf)LS) that we good for the heart and keep heart dm eases at bay. Lipoproteins are found in the blood W carry fatty chemical substances wm-n as lipids, which play the imporw role of ferrying cholesterol in rr body via the blood stream. ik low density lipoproteins (LDLS) orisport cholesterol from its site production in the liver to the cells, bere it is used to build cell walls and rnerate energy, HDLS transport xtss or unused cholesterol from the 's tissues back to the liver, where it broken down and excreted. Experts btve that HDLS may retard the build p of fats and are, in fact, beneficial to health.

The AHMS Study on the effect of alco consumption on the heart was con atd by L M Srivastava and colleagues the department of biochemistry at The scientists studied 45 healthy sks, of which 10 were moderate wkers, 10 heavy drinkers. The naming constituted non-drinking scrols. The men were between 35 to 65 years of age. The moderate drinkers consumed 26 in] of' absolute alcohol (about 2 pegs of whisky) per day, 3-5 times a week, whereas the heavy dose drinkers drank 78 ml per day, 4-6 days a week.

Blood samples from the subjects revealed that the levels Of HDL-cholesterol were elevated both in moderate (13 per cent increase) and heavy drinkers (21 per cent increase) as compared to the controls. But the scientists point out that there is published evidence that in the long run, heavy alcohol consumption hampers syntheSiS Of HDL, resulting in the deposition of cholesterol on the,, arterial walls.

Says Srivastava, "There is no other foolproof method of increasing HDL and alcohol may have potential therapeutic applications." The scientists now want to extend the study to heart patients. As Srivastava puts it, "It might not seem wise to recommend alcohol drinking, but should we not make use of something that reduces the risk of heart diseases?"