Tissue transplant: by whose consent?

The removal of the corneas from the body of an accident victim in France, shocked the public and exposed the legal and ethical failings of the transplant system 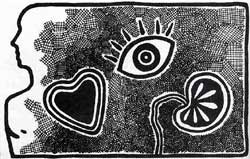 PROMPTED by the publicity resulting from the "ghost-like stare" of a dead accident victim, the French government is taking a hard look at the country's organ transplant system. The blank stare of Christophe Tesniere was because his eyes had been surgically removed and replaced with glass eyes, so that the corneas could be used to give sight to someone else. This and the fact that other parts of his body were removed for transplanting, came to light after Tesniere's parents received a bill from the hospital for so-called post-mortem surgery and became incensed enough to demand an investigation.
The French government survey shows while organ transplants are quite efficiently organised by an independent, non-profit association called France-Transplant, the same cannot be said about tissue transplant. Though these are handled by a similar non-profit organisation, France-Tissue, its operations give no clue to the identity of the donor or if an infection needs to be traced. Nor can it prohibit surgeons from storing body parts in refrigerators for future transplanting.

French regulations governing organ donation are based on the so-called 1976 Caillavet law, which presumes consent to organ donation unless the victim specifically stated otherwise to close relatives. But there is a 1949 law that states corneas -- considered tissue rather than an organ -- may be removed only if the person has given written consent.

The government has now come up with a bioethics bill that has already passed its first reading in the national assembly. It upholds the principle of presumed consent in the Caillavet law but sets up a computer network that persons can access easily to record they do not wish to be donors.
But the bill does not specify clearly what would be the outcome if there is no computer record of the individual's opposition to organ donation -- which would then imply consent under the Caillavet law -- but the person's family expresses strong objection to organ or tissue removal. Nor does the bill clearly answer the question of whose wish would count more: a parent's objection or a spouse's consent to removal of the deceased's tissue or organs?

The French concern for regulating transplants is motivated in part by its finding that a high number of foreigners are coming to France for organ transplants. The scope is particularly vast for unscrupulous elements seeking to prey on both the desperate desire of the ill to be cured and financial need of the poor and the ignorant, especially in Third World countries, who can provide the tissue and the organs that can cure them.

Despite a ban in India on trade in human organs, a Swedish newspaper reported recently that it took just five telephone calls by one of its reporters to Bombay to find a surgeon willing to perform an organ transplant operation for a total (cost of organ, operation fee and hospitalisation) charge of 75,000 Swedish Kroner ($9147 approximately). The doctor, who was not identified by the mass circulation daily, Svenska Dagbladet, asked for only two weeks' notice. The waiting period in Sweden for a similar surgery would be at least two years, the paper said. The Svenska Dagbladet report also disclosed that three of the doctors said they would not perform transplants unless the patient and donor were blood relatives and the fourth said he carried out transplants on Indians only.