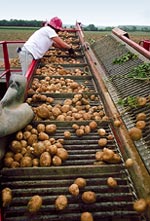 Canada seems to have settled scores with the us by restricting imports of mop top virus-infected American potatoes. In 2000-2001, the us had imposed a ban on potatoes from Canada's Prince Edward Island after some were found to have potato warts.

The Canadian officials are taking a series of measures to curb the spread of the virus which causes black arcs inside the potatoes, spoiling their appearance and rendering them unfit for the market.

The restrictions will apply to nine states: Idaho, Maine, California, Washington, Oregon, Florida, North Carolina, Virginia and Maryland. Seed potatoes from these states will be banned until a certification scheme is put in place. Canada will begin making mandatory certification of origin of all potatoes from the us. It will also require that potatoes bought in bags for household use and produced in these states have sprout inhibitors sprayed on them to prevent them from reproducing. Companies importing bulk potatoes from these states will have to enter into a compliance agreement with the government to ensure proper disposal of waste.