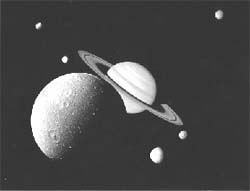 titan, Saturn's largest moon, has conditions that resemble those that prevailed on the Earth before the advent of life. Now scientists have discovered that the moon has high velocity winds which blow from west to east. This new information will prove invaluable for space scientists who are planning to land a probe on Titan in 2004.

us National Aeronautical Space Administration ( nasa ) and the European Space Agency have already launched a mission to explore Saturn and its moons. The spacecraft, Cassini, which was launched in 1997 will release a probe called Huygens to explore Titan in 2004. The 350 kilogramme probe will land on the icy moon and relay back data about Titan's atmosphere and surface to the orbiter that will transmit it to earth. T Koustiuk of the nasa Goddard Space Flight Center in Maryland, usa , has used the three metre Infrared Telescope at Mauna Kea in Hawaii to study Titan. They have found that about 200 kilometres above the surface of Titan there are winds blowing from west to east at speeds as high as 750 km per hour.

They detected the infrared light emitted by ethane molecules in the upper atmosphere of Titan. The ethane molecules are moving and hence their speed and direction effects the frequency of the light emitted. This effect, called the Doppler effect is also experienced when the pitch of siren on a speeding ambulance changes. By comparing the frequencies from the eastern and western edges of Titan, the scientists were able to infer the wind speed and direction. This information will help predict the path of the probe ( Geophysical Research Letters , Vol 28, p2361).