To fish or not to fish 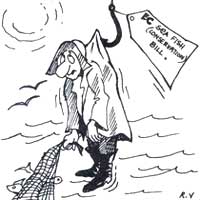 THE FISH and the fishermen are both in trouble. To prevent a total collapse of fish stocks and the fishing industry, a drastic reduction in the European Community's (EC) fishing fleet has been proposed under the Sea Fish (Conservation) Bill. The critically low fish stock includes cod and haddock. The bill will enforce cuts of upto 30 per cent by restricting the number of days fishing vessels can spend at sea.

Over 3,000 fishermen from all over the UK protested the proposed bill, claiming it would make them bankrupt. A protester marched up to the prime minister's residence, carrying a crate of fish and a petition signed by 1,000 people, and said, "My opposition starts with my stomach."

The bill follows a report on the Common Fisheries Policy from the House of Lords select committee on the EC. The committee also recommends a phasing out, over 10 years, of the catching of fish for industrial use. It suggests the setting up of "closed boxes", or areas where fishing would be banned or restricted to protect spawning and juvenile fish.