To kill a mocking pest

With pesticides no longer a viable means of controlling pests in most cases, the search for alternatives like bio-pesticides has proved that there is enough arsenal in plants to bring to heel even the most resistant variety 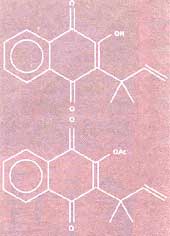 A DELICATE plant, producing yellow flowers -Calceolaria andina is proving to be the nemesis for a notoriously high-resistant variety of tobacco whitefly, Bemisia tabaci. Two chemicals from the plant, which grows high on the Andean slopes, has been found to be fatal for the B- biotype species of the pest. This insect attacks about 600 species of plants including cash crops like cotton. The B-biotype multiplies five times faster than other strains of B. tabaci, and also manages to transmit upto 60 disease-causing viruses into the host while feeding on it.

Fortunately for the agricultural scientists, the two napthoquinone corn pounds extracted from C. andina have potent killing powers not only for the tobacco whitefly, but also for aphids and other pests like spotted spider mite (Tetranychus urticae) and the peach potato aphid (Myzus persicae), which have grown resistant to common pesticides (New Scientist, Vol149, No 2013).

Under the aegis of an international research pro- gramme, the plant was collec- ted in an attempt to identify biological pesticides derived from wild plants. Hermann Niemeyer from the laboratory of ecological chemistry at the University of Chile in Santiago, gathered some 400 plants from the area, the extracts of which were sent to the University of South-hampton's agrochemical evaluation unit in UK. Here, they were tested for possible effects against pests. The Southhampton team then sent extracts of the 20 most promising plants to the Institute of Arable Crops Research, Rothamsted in Hertfordshire, UK for further analysis. It took Rothamsted scientists just a week to isolate the naphthoquinones and demonstrate their lethality. Says Bhupinder Khambay of the team, "They are very easy to extract and account for five per cent of the dry weight of the plant."

In order to test the potency of the chemicals, the scientists chose the world's most insecticide-resistant whitefly, aphids and mites, and found that they died within minutes of being exposed to either of the compounds. Scientists at Rothamsted are now trying to establish the mode of action of the compounds so that they can avoid future problems related to resistance. This would help to define the application procedure of the insecticide. Khambay, along with a colleague, John Pickett, is also studying the structure of the compounds in an effort to develop synthetic variants which are stronger.

Another set of scientists at the Royal Botanic Gardens, Kew in the Caribbean islands of Turks and Caicos, are trying to find the potential of c. andina as a source of naphthoquinones. Led by Monique Simmonds, the scientists are also studying the relatives of c. andina growing in the temperate regions to find if they also produce substances akin to the Iiaphthoquinones. Another option according to Simmonds is to grow plants which produce compounds that can easily be converted to naphtho- quinones, like Lawsonia inermis which produces the raw dye, henna.

Earlier investigations, both at Kew and Rothamsted, have suggested that the naphthoquinones are harmless to beneficial insects like the ladybirds. The British Technology Group, which pat- entsand licences inventions, has patent- ed the naphthoquinones in the hope that within five to seven years, the com- pounds will be a commercial success.