To pull down or not 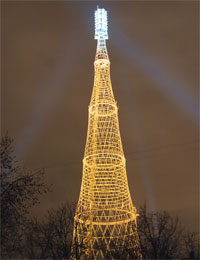 One of the great feats of 20th-century engineering in Russia faces demolition. In the last week of February, the Russian State Committee for TV and Radio Broadcasting agreed to dismantle the Shabolovka radio tower in Moscow.

The radio tower, a 50-storey conical structure of steel latticework, shaped roughly like a collapsing telescope, is dubbed as the Eiffel Tower of Russia. Commissioned by Lenin and completed in 1922, the tower was intended to spread the word of communism through the new radio technology and to stand for the regime’s revolutionary ambition.

An array of international architects, engineers, academics and cultural leaders has signed a petition, pleading with Russian President Vladmir Putin to spare the tower. But proponents for dismantling the tower say it is a wreck.