To quake or not to quake

Earthquakes occurring below oceans have been the subject of intense speculation of seismologists across the globe. Theories of the past have failed to pinpoint the exact cause of why or how earthquakes ensue. A new theory now tries to demystify the incidences of tectonic imbalances occurring in certain areas while bypassing the rest 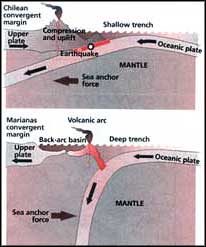 THE oceanic crust of the earth is in perpetual motion. The numerous plates forming the crust are either moving towards each other or away from each other. Where they diverge, the gap is filled up by freshly formed igneous rocks and where they converge, one plate moves under the other till it merges with the underlying mantle. At places, this process, known as subduction, is accompanied by a major earthquake; in other areas, but for the knowledge of seismologists, the event under the sea passes off quietly.

Why this happens has been explained by Chris Scholz of Colombia University's Lamont-Doherty Earth Observatory and Jaime Campos of the University of Chile in Santiago. Working on a proposal forwarded in the late'70s by seismologists Seiya Uyeda of Tokai University in Japan, Hiroo Kanamori of Caltech and others, Scholz and Campos arrived at the conclusion that the direction in which the resistant force - known as sea anchor - acts, determines whether subduction will Potent power."the sea anchor force can turn earthquakes on or off be accompanied by an earthquake or not (Science, Vol 270, No 5239).

When the subduction zone cruises over the underlying mantle, the descending slab sweeps into the viscous mantle rock generating a resistant force. If this force acts in the direction opposite to the movement of the descending slab, it bends it inwards and subduction takes place without an accompanying earthquake. It also opens up a nascent ocean in the back arc basin formed due to the pulling apart of the overriding plate. But when this force acts in the direction of the plate movement, it pushes the lower slab upwards against the upper plate, setting the stage for a massive earthquake.

The 7.8 Richter scale earthquake which struck the subduction zone near Guam in 1993, forced seismologists to take a second look at the traditional theory. This subduction zone is the same as the one which spreads north towards the Pacific Mariana Islands onto Japan and is generally peaceful. As the subducting plate is of the same age and moves with near even velocity, the occurrence of the earthquake only at Guam had put the seismologists in a quandary.

Elaborating on the picture, Scholz and Campos have framed a model of the subduction zone forces by assuming that the descending slab is not fixed, but sweeps below the upper slab into the mantle. This model explains the anomalous behaviour of the subduction plate near Guam. Scholz and Campos applied their model to 30 subduction zones around the globe to check if their predictions on the occurrence of earthquakes and spreading of back arc basins hold good. They achieved 80 per cent positive results which is the highest ever in geophysical modelling and keeps them optimistic with regard to the acceptance of their theory.