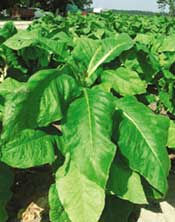 tobacco is in for a drastic change in image: a known carcinogen, it may now be used to help fight cancer. The plant might be one of the most effective ways to produce drugs, such as therapeutic antibodies (proteins that fight infection), and vaccines against breast cancer, among other diseases, suggests the Umea Plant Science Center, Sweden, working with scientists in Stockholm and France. The researchers have now identified a new transport route for incorporating antibodies inside plant cells, which will be published in the coming issue of Nature Cell Biology.

Similarities between plant and human cells have encouraged scientists to evolve ways to use plants to mass produce vaccines and antibodies cheaply. Animal cells that are usually used for the purpose, work out to be expensive. Scientists chose the tobacco plant because it is a well-researched model system that is easy to mould.

A big problem with using plants to produce antibodies has been their low yield. This is hoped to be overcome with the new transport route that involves the membrane system, where antibodies are produced, and the chloroplasts, where they can be stored (and multiplied) until the plant is cut.