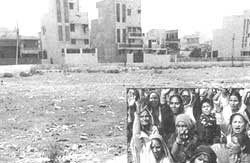 THE COUNTRY'S first-ever agitation on the right to defecate has come to a sorry end. Residents of a slum in Ashok Vihar, a north Delhi colony, find themselves sandwiched between a court verdict that requires some of them to shift to create space for toilets and local residents opposing their practice of defecating in a public park. In late August the Delhi High Court ruled in a compromise between the opposing aspirations of local residents and slum dwellers that some jhuggies should be cleared to make space for toilets which the Delhi Development Authority's (DDA's) slum wing would construct. The slum-dwellers are resigned to their fate. ''We will use the toilets as long as they function and then go back to using the park,'' says S C Seel, general secretary of the welfare association formed by the hutment dwellers. DDA had earlier built 32 toilets for the slum-dwellers but within a few months, they clogged up. In using the park to defecate, the slum-dwellers run the risk of being beaten up by the police but, as Seel says, what other option do they have?