Gene analysis shows how it got its size and flavour 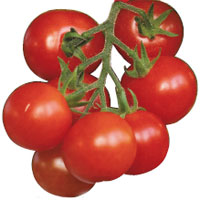 WANT tomatoes to be more juicy, red and nutritious? No worries. A nine-year research by 300 scientists from 14 countries, including India, has finally made this possible. The scientists have sequenced the genomes of the domesticated tomato (Solanum lycopersicum) and its wild ancestor (Solanum pimpinellifolium). The discovery gives an insight into how the tomato has diversified and adapted to new environments.

The scientists believed that tomato originated in Peru and from there it was brought to Mexico. Then around the 16th century, after discovery of tomato in the US, it was brought to Europe and then to Asia. The transfer of tomato from one habitat to another led to slow evolution of its genes. The present traits in the domesticated tomato are the result of this slow evolution called a genetic bottleneck.

Subsequently, most of the original genes were lost. However, some of the most important genes that control the most appealing traits of tomato evolved gradually. For example, wild tomato was originally the size of a pea. But due to genetic bottleneck the tomato grew to the size we see today. Similarly, the flavour and fleshy part of the tomato are a result of the same process. But the red colour of tomato has existed for million of years.

The discovery is significant because tomato sequencing can serve as a model for other nightshade plants (common name for plants in the genus Solanum), including many agriculturally important crops like potato, tobacco and egg plant. It also comprises some medicinal and ornamental plants like belladonna. The sequencing will help chose the most desirable traits and speed up efforts to improve tomato production. It will also better equip the crop to combat pests, pathogens, drought and disease that plague growers. Forty per cent of the tomato yield is destroyed every year due to these reasons in India alone. The country is the third largest grower of tomatoes.

The Indian scientists sequenced the euchromatic region of the tomato chromosome. The region constitutes some of the major genes which decide size, juiciness and flesh. “Our emphasis was on chromosome 5 of tomato,” says Akhilesh Kumar Tyagi, director of National Institute of Plant Genome Research in Delhi. They also analysed specific genes related to ripening, nutrition and disease resistance. N K Singh of National Research Centre of Plant Biotechnology of Indian Agricultural Research Institute in Delhi, says the research will help people by increasing and improving the quality of lycopene, an antioxidant. For farmers it will help boost solid content which is used for making tomato purees, he adds. The study was published in the May 31 issue of Nature.