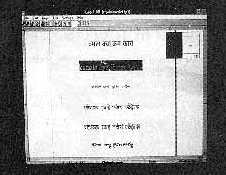 NOT SO long ago you had to run to the local polyglot to get a missive in an unfamiliar language deciphered. Come computers and you can now read that blasted letter without supercilious help.

The key to multilingual ability lies in a software called Apex Language Processor (ALP), which transforms any Indian script into any of 10 others. And English as a bonus. ALP, which was developed by the Pune-based Centre for Development of Advanced Computing (CDAC), was released into the market last year. But it costs a dear Rs 3,000, rather much to get a letter read.

Like primers on driving lessons, CDAC recently launched a primer to ALP named ALP Start Up (ALPS), priced at one-sixth of ALP, and free from copyright protection. ALPS doesn't allow saving or editing of files and does not have a spellcheck facility, but files can, nevertheless, be read and printed in any of the 11 languages.

ALPS is the latest in a line of CDAC children of the revolutionary Graphics and Intelligence-based Script Technology (GIST). Existing computers have been primarily designed to handle the Roman script, using the all-too-familiar English typewriter keyboard. All other languages have to be adapted to the English keyboard, says CDAC's Mohan Tambe.

GIST has solved this problem by providing a single keyboard overlay called Inscript. It codes for all the 10 Indian scripts which have a common origin in ancient Brahmi. Inscript includes only the basic alphabet, which fits easily on the English keyboard overlay. This guarantees a unique spelling for each word, with letters occurring in phonetic order. The basic letters combine to form complex conjuncts and vowel signs are attached above, below or beside these characters, using a standard character-set for each script called Intelligence-based Script Font Code (ISFOC).

Inscript also provides a common code and keyboard for the two Sri Lankan scripts -- Sinhalese and Tamil -- as well as for Tibetan, all of which have their roots in Brahmi. And for the Thai script, which also has its origin in Brahmi. For Persian and Arabic scripts, GIST offers a common keyboard containing just the basic alphabet.

Transliteration, or converting one script into another, is just one of GIST's specialities. ISFOC is also compatible with MS-Windows, a graphics-oriented software used on IBM-compatible personal computers. Another software called ISFOC Script Manager (ISM) developed by CDAC allows the typing of Indian languages displayed through ISFOC fonts, directly through the Inscript keyboard. A version of ISM is also available for the graphics programme used in Macintosh computers.

Although ISM allows the preparation of files containing multiple scripts, it does not allow transliteration between scripts. This handicap can be overcome using a software called LEAP (Language Environment for Aesthetic Publishing) on the Windows package, which stores only the basic alphabet.

Another package called Transname allows transliteration between English and other Indian scripts. In India, which has a vast diversity of tongues, these packages are likely to be immensely useful.