Too fast for turtles 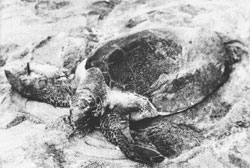 gahirmatha beach in the eastern state of Orissa, the world's largest rookery of the endangered Olive Ridley turtle, will soon lose this superlative. The turtles do not find the beach suitable for nesting any more and are changing to other places following continual disturbances due to human activities. This has already happened on the Mexican coast, which was earlier the largest rookery, but lost its marine diversity due to reckless developmental activities. Last year the beach missed its world famous visitors. The other famous rookeries of the turtle are the coasts of Honduras and Surinam.

Since 1975, the turtles skipped the Gahirmatha rookery thrice in 1981-82, 1987-88 and 1996-97. It is believed that unsuitable beach conditions and large-scale disturbances in the off-shore waters due to mechanised fishing might have deterred the turtles. The "silent zone" of the sea is often invaded by trawler operators. According to the estimates of Project Swarajya, a Cuttack-based non-governmental organisation involved in the protection of the turtle, about 7,000 trawlers are operating near Paradeep; 2,000 near Dhamra and over 1,000 at Kashaphali (all these places are close to Gahirmatha). But as per the capacity, only 350 trawlers should operate near Paradeep and 150 near Dhamra. That large-scale fishing is going on uninhibited in the vicinity of the rookery can be ascertained by consulting local newspapers that carry satellite information on the availability of fish in the sea. According to the surveys and video recordings by Project Swarajya on March 18-19, 1997, more than 5,000 turtles and about a dozen dolphins were killed during the last three months by trespassing trawlers. It is estimated that 50,000 to 80,000 turtles were poached off the shores near Gahirmatha in 1979. This explains their absence in 1981-82.

When discovered in 1975 by H R Bustard, a Food and Agriculture Organisation and the United Nations Development Programme consultant with the government of India, turtles were nesting along a 10-km stretch of the coastline. The first shift in the nesting place took place in the early eighties. The turtles deserted the nesting area near Habalikhati and moved northwards. The cyclonic storm of 1989 wrought havoc on the turtles. The storm ripped apart Gahirmatha beach and the Maipur river opened into the Bay of Bengal, cutting through the mass nesting beach. Sand pits were cut off from the main beach, forming a four-km-long elongated island. In 1989, mass nesting was restricted to the newly-formed island. Not more than 100 turtles nested in the beach near Ekakula forest rest house where lakhs of turtles had nested one year earlier. The Gahirmatha rookery was then renamed Ekakulasani rookery.

The 3.8-km-long island, with an average width of 100 metres, has drastically reduced the nesting space for turtles. Lack of space has resulted in a hatching mortality of 80 per cent, according to the Centre for Ecology and Development, Bhubaneswar. The low-lying Nasi island gets inundated during the monsoon. Beach formation takes place prior to the nesting season. During the tidal days in spring, inundation drastically reduces the hatching success rate. Exactly one month after the nesting in 1995, a 3.2-km stretch of the low-lying island got inundated frequently by tidal waves, exposing millions of eggs and reducing the hatching survival rate to 25 per cent.

Over the years, the turtles have continuously shifted their nests. In the last 22 years, two more rookeries have been discovered along the Orissa coast. Chandra Sekhar Kar, a research scholar who has been working on the turtle since 1975, discovered the rookery at the mouth of river Devi in the undivided Cuttack district in 1981. He estimates the nesting population as close to one lakh. Even after the discovery, no measures were taken to provide safe nesting of the turtles. This rookery affected by casuarina plantations, leaving no space for nesting. "Casuarina plantations with their thick litter fall and root growth drastically change the beach topography, making it difficult for the turtles to dig their nest chambers," says Kar. In March 1997, 15,000 turtles nested in the newly-formed Robert island near the mouth of the Devi river. This island is located in front of Akash Dia, a former rookery. In March 1994, a new sea turtle rookery was discovered at the mouth of Rushikulya on the south coast of Orissa. This rookery is located 300 km south of Gahirmatha. The nesting population here is about 1,00,000-1,50,000.

In March 1995, an estimated 50,000 turtles nested in Rushikulya. However, changes in the landuse pattern from agriculture to intensive prawn culture in adjacent areas jeopardising the future of the turtle. Bright lights in the prawn fields are disorienting the turtles -- the hatchlings emerging from the nests are attracted to the bright light. Instead of heading towards the sea, they start moving towards the source of light. This results in large-scale hatching mortality, says Bivash Pandav of the Wildlife Institute of India.

Other mindless developmental activities around the nesting area are threatening the turtle. One is the missile testing range of the Defence Research and Development Organisation ( drdo , hardly 20 km from Gahirmatha beach). "Noise and illumination from the missile testing range will definitely affect the turtles seriously, as their nesting habits are nocturnal. We are not against the drdo project, but we want safeguards for the turtles," says Banka Behary Das of the Centre for Ecology and Development ( ced ), which is campaigning for the protection of the beach.

In January 1997, during an international seminar on the turtle in the state capital Bhubaneswar, A P J Abdul Kalam, the drdo chief, while replying to protests against the project said, " drdo can be useful in a mission such as attracting millions of turtles for breeding near Gahirmatha beach. We are with the marine ecologists and concerned about the environment, particularly the nesting of turtles in Ekakulanasi." He promised that no missiles would be tested during the breeding season, illuminations will be masked, and drdo would request the Coast Guard to protect the sea from illegal trawlers.