Too high a price

Unwitting subjects to a 1954 nuclear experiment, the former inhabitants of a Pacific atoll continue to suffer 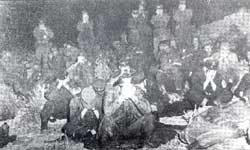 THE Pacific atoll of Rongelap in the Marshall Islands is still paying the price for a badly-managed American nuclear test explosion 40 years ago, which drove its people from their homes, irrevocably changing the course of their lives. The final straw came in late July, when the exiles from Rongelap were informed by the us National Academy of Sciences (NAS) that, if they went home, they would have to radically alter their traditional lifestyle. Instead of living off the land, they were advised to eat at least some imported food and use special fertilisers to reduce radioactivity in indigenously grown food.

Rongelap's trials began on March 1, 1954, when a strange "snow" drifted over the coral atoll. Children rejoiced at the unusual phenomenon, but little did anyone suspect that the so-called snow was the radioactive fallout from the nuclear test explosion on Bikini atoll, 200 km away. Two days later, American troops rushed in to evacuate them.

The people of Rongelap have since been in a state of limbo. In 1957, after being treated for radiation sickness, they were sent back to Rongelap with an assurance from the us government that the radioactivity was within safe limits. However, high rates of cancer and other health problems forced them off the atoll once again in 1985.

This time, the environmental group Greenpeace came to their rescue with its ship, Rainbow Warrior. The destination was Kwajalein, a more densely-populated atoll in the Marshall islands 300 km from Rongelap. Although there are 1,000 Rongelap refugees on Kwajalein, their limited resources and attachment to their own land makes it hard for them to stay on. Marshall Islands officials believe that, given a choice, about 400 of them would return home.

The Rongelap islanders have not been able to shake off their distrust of the us. They say that they will go home only if the us can assure them that radioactivity levels will be not more than 100 millirems above the dose from background radiation - limits considered rather stringent by the panel that compiled the NAS report.

The islanders also wonder why they were sent back too soon and deliberately exposed to nuclear fallout. Their suspicion is based on documents released by us energy secretary Hazel O'Leary, under the department's "openness initiative". According to Marshall senator Tonyde Brum, these documents prove that the nuclear test that spewed radioactive contaminants into Rongelap was carefully planned the year before the blast.

Further, documents on Project 4.1, described as a study of the response of human beings to radioactive fallout, coldly terms the people evacuated from Rongelap and 2 other atolls as "subjects". And, in an evidently clumsy attempt at covering up, a preliminary report on the project refers to human beings "accidentally exposed" to the nuclear fallout.

This reference to accidental exposure may deprive the Rongelap islanders of rightful compensation, us president Bill Clinton's advisory committee on human radiation experiments, formed to decide compensation for victims of radiation experiments, says that it will not take up cases of people accidentally exposed during nuclear testing. Only if the affected people prove that their exposure to the nuclear fallout was premeditated, and thus constituted a medical experiment, could the agony the Rongelap islanders have lived with for 40 nightmarish years be somewhat compensated for.