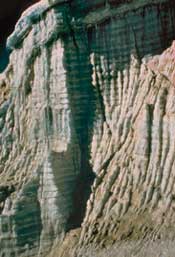 the average temperatures have gone up more during the last century than at any other period during the past 1,200 years, claims a recent study by researchers from the Climatic Research Unit at the University of East Anglia in the uk.

The scientists Tim Osborn and Keith Briffa tracked and analysed temperature data from the year 800 to 1995 for 14 spots in Canada, Greenland, Belgium, Sweden, Mongolia and other countries in the Northern Hemisphere.

While the temperature figures were available from 1856, the scientists used indirect evidence for estimating the data from the year 800 to 1856. The research team gathered climate change data from long-life evergreen trees in Scandinavia, Siberia and the Rockies, which had been cored to reveal the patterns of tree rings -- wider rings imply warmer temperatures. The team also analysed ice cores from Greenland, which revealed which years were warmer. Besides, the scientists studied a record based on diaries of people living in the Netherlands and Belgium over the past 750 years that revealed the years when the canals froze.

Past periods of warming and cooling such as the so-called 'Little Ice Age' were found consistent with the results of the study, published in Science (Vol 311, No 5762, February 10, 2006).