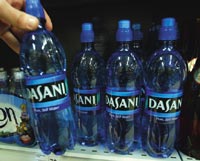 The Food Standards Agency (fsa), uk's official watchdog for food safety and standards, said that Dasani might have broken guidelines designed to protect shoppers from misleading marketing. "Bottled water in the uk is sold as natural mineral water or spring water or drinking water (tap water). If a product is not labelled as mineral water or spring water, it will, in fact, be bottled drinking water," an agency spokesperson said. The term 'pure' by fsa standards applies to "single ingredient foods or to highlight the quality of ingredients."

Dasani takes tap water, a pure product, removes material through purification, and then adds calcium, magnesium and sodium bicarbonate for taste. This does not qualify to be called 'pure' according to the fsa.

The Coca Cola officials claim the calcium carbonate added regularly to Dasani was contaminated, which initially triggered the pollution.

Early March, after some relentless campaign by London-based newspapers like Daily Mail the fsa had asked its county office to confirm facts of Dasani's water source. Coca Cola at that point declared that the water was drawn from the municipal main pipeline and was treated at a factory in Sidcup, Kent for nutrient levels.

Following the recall, however, the company admitted that they had tested higher level of the carcinogenic bromate than those permitted in uk, in the samples. The recall will make the relaunch of the second biggest bottled water brand of us into the country near impossible, market experts in uk opined. The cola giant had earlier faced flack from the media in the country for bottling and selling treated and purified tap water. Would this be possible in India?