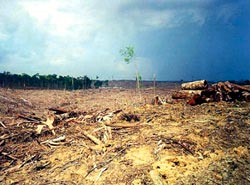 Indonesia's tropical forests are fast dwindling, courtesy rampant illegal logging. Taking stock of the situation, the country has now imposed a permanent ban on log exports. In October 2001, a joint decree banning exports of logs was passed temporarily. The government discussed the matter with the International Monetary Fund (imf) with which it has a us $5 billion loan programme.

Indonesia first imposed a ban on log exports in 1980, but later replaced it with a 200 per cent export tax. Due to its pact with imf, it reduced the tax to 10 per cent by 2000. The tax reduction gave loggers a free hand to plunder the country's natural resources.