Blog>> Court Verdict • The US

A US District Court judge in Portland has drawn a line in the sand between “journalists” and “bloggers”. The distinction has cost blogger Crystal Cox US $2.5 million. 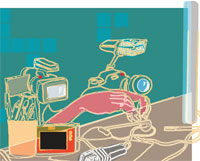 Cox, who runs several law-centric blogs, like industrywhistleblower.com, judicialhellhole.com, and obsidianfinancesucks.com, believes the judgement could have serious repercussions. Cox was sued by investment firm Obsidian Finance Group in January for defamation for writing blog posts that were highly critical of the firm and its co-founder Kevin Padrick. Representing herself in court, Cox had argued her writing was a mix of facts, commentary and opinion (like a million other blogs on the web) and moved to have the case dismissed. Cox argued her post was factual because she had a source leaking her information. She refused to divulge her source under the US media shield law. But the judge ruled indemnity applied only to journalists. “Cox did not qualify for shield-law protection ... because she is not employed in an official media establishment,” the judgement noted.