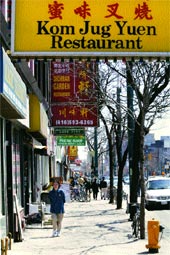 New visitors to Toronto, if any, cannot be blamed if they think the city has become a ghost town. Tourists are likely to be greeted by empty shops and streets, with hotels offering high discounts to fill their mainly vacant rooms.

The World Health Organisation's (who) recent advisory against travelling to Canada's biggest city in view of the spread of Severe Acute Respiratory Syndrome (sars) has rendered Toronto an international pariah. The German government requested a group of students to cancel their visit. Two children's choirs from the us pulled out of a festival and returned home after hearing about the who alert. Canadians living in other cities are also wary of interacting with Toronto residents. A few have even requested their Toronto-based relatives to keep away for some time.

Local politicians, including the city's mayor, and health specialists have been quick to criticise the who's action. They claim that the city is safe and the recent outbreak -- limited mostly to health workers -- is well under control. The only Toronto residents to have benefited from the sars scare seem to be vendors hawking "survival kits".