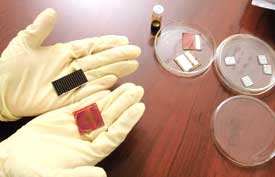 us researchers have fabricated a solar cell out of everyday plastic, hoping to meet the growing energy demand with a more affordable way to harness the Sun.

Scientists at the Henry Samueli School of Engineering and Applied Science, University of California at Los Angeles (ucla), led by Yang Yang, hope their innovative new plastic (or polymer) solar cell can eventually be produced at a mere 10-20 per cent of the cost of traditional cells in order to make the technology more widely available.

A solar cell is basically a three-layer sandwich, wherein electrons in the top layer (n-layer) get stimulated by light absorption and travel through the middle layer (junction) to the positively charged bottom layer (p-layer). The middle layer is part of an electric circuit consisting of thin connecting wires and so, electricity is generated when the electrons travel through the circuit.

Technological advancements over the past decade have pared down the cost of solar cells by one-fifth of its original cost. But even then its cost of production vis--vis conventional fuels remains prohibitive.

For the same amount of power delivered, the price of quality solar modules typically works out to around three to four times more than that for fossil fuels. While prices of solar cells have dropped since the early 1980s, they represent just half of the total installed cost of a traditional solar energy system. The rest of the system is as expensive as it was. Also, almost 90 per cent of solar cells use highly refined silicon whose prices have rocketed due to the high demand from the computer industry.

In contrast, ucla's solar cell costs roughly one-third that of traditional silicon solar technology. The new solar cells are based on a junction of polymers poly(3-hexylthiophene) and methano fullerene. They have achieved the highest power conversion efficiency -- 4.4 per cent-- in plastic solar cells owing to, first, the increased mobility and balanced transport of electrons through the layers of the cell and second, increased absorption of electrons in the active layer. But this is still quite low compared to an efficiency (percentage of incident sunshine it gathers) of over 14 per cent in silicon cells.

A major argument against plastic solar cells is the low fill factor (ff), which is an indicator of the efficiency of the solar cell and depends on the material used; higher ff implies less resistance to flow of electrons and so, better efficiency. ucla scientists report ff of 67 per cent for their cell, which is one of the highest reported for polymer solar cells.

However, A K Mukherjee, chief scientific officer at the Indian Institute of Technology, Delhi, is not so enthusiastic about the future of solar cells. "It is totally unfeasible to use solar panels in urban areas like Delhi because of the high land costs. Solar panels take up a lot of space and, if installed far from urban areas, there is still the problem of pumping the generated electricity to the high-demand areas," points out Mukherjee.

Given the current low power conversion efficiency in solar cells, it is critical to ensure zero loss of power from the source to the device, which is Mukherjee's focus.

"Photovoltaics are still a game of the rich countries considering the cost involved and polymer cells still have a long way to go if they are to compete with silicon cells, leave alone conventional fuels," says Mukherjee.